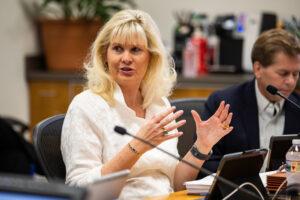 Our more politically ambitious or aware readers probably know of various civic and public affairs leadership groups in the Valley; Valley Leadership is perhaps the most prominent one, Greater Phoenix Leadership is another. These are groups dedicated to showing our region’s most bright and ambitious future leaders the ropes of what leadership actually looks like within the machinations of local and regional governance.

So why not have a more localized version of that? We should also be training potential future local leaders and showing them the ropes of what local leadership is and could be, right?

Councilmember Julie Pace is calling for just that in this op-ed to the PV Independent. What’s the rationale behind it? According to Pace, “Because every good organization needs to train and mentor new people to take the place of those currently serving in leadership”.

And she’s right; every election ambitious people run for office with only a few vague ideas of how cities, counties and states are run. They want to make a change without truly understanding how things actually work in governance. And while a few of these starry-eyed folks will actually win their election, they then have a steep learning curve to learn about the inner workings of their role, and often when reality does not meet expectations, a dissatisfaction stews.

Who wouldn’t want something like this in Paradise Valley? Paul Dembow, who is now running for his 4th term; while most others are relatively ignorant on the inner workings of the town, it allows him a talking point of his necessity, and the importance of not having term limits. Indeed, having a program like this in combination with term limits could help ensure fresh new leadership without a significant loss in experiential wisdom.

As a similar dynamic plays out in cities and towns across the state (and almost certainly the country), we believe that this is a fantastic common-sense idea to help ensure that leadership doesn’t get too far entrenched, and that wisdom is spread instead of being hoarded. That benefits ALL of us.