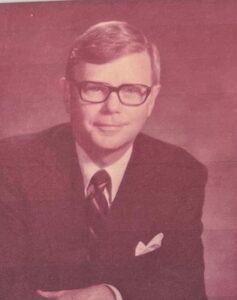 The town of Paradise Valley is one of a kind, and it owes that to decades of good governance. A member of that past governance is now gone, and is worth remembering.

Former PV Mayor David Hann passed away recently at the age of 92. Like many people in the Valley of the Sun, he was not born here, but instead moved to PV from Kansas in 1959 in his desire to focus more on the computer industry (yes, computers…in 1959). He had a successful career in business consulting in that industry for quite some time before even considering a run for office.

All in all he spent four years on the Town Council and two years as Mayor; while not an impressive or overwhelming amount of time, it was a productive time in office. He helped preserve the town by not having it cut in half by the proposed “Paradise Parkway”, helped construct the police building, and procured bonds at a very low interest rate at the time, allowing them to build out more while still staying within the confines of good fiscal governance. Furthermore, he helped usher in the burying of electric lines, something that has likely helped avoid serious injuries or deaths over the years.

One of the things that he is best known for however was his push to get his fellow citizens involved in civic activities and governance. In an age when many towns and cities depend on the ignorance of its citizens, Hann chose to lead a pathway of transparency, openness and involvement. A very good model indeed.

We would be well served by more leaders like Hann. In order to honor his leadership, the Hann family has asked that you consider a donation  to the Desert Botanical Garden or plant a tree in his memory.