As soon as Willard “Mitt” Romney was elected Governor of Massachusetts he began running for President.  After losing the GOP nomination in 2008 he immediately started running again.  After being the nominee in 2012 he lost a winnable general election.  Then he started calling upon his inner Adlai Stevenson (a 3-time loser for the Democratic nomination for President) and quietly embarked on plans for a third Oval Office run. 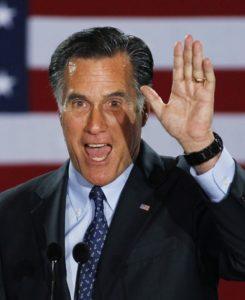 But then the early Jeb Bush juggernaut – to be confused with the later “low energy” WASP — scared him out.
But that hasn’t stopped the wily Willard, always on the look out for himself.  After enthusiastically embracing Donald Trump in 2012 Wily Willy now sees opposition to him as a bank shot to the banks of the Potomac. These efforts continue on the eve of Arizona’s presidential primary as well as one in Utah.
Romney wants to #NeverTrump by encouraging votes for Rubio in Florida, Kasich in Ohio and Cruz not Kasich in Utah.  To what end does this Political Pythogras operate now?  His own, as the nominee at a brokered Republican convention.
His strategy is as shameless as his 2008 flip-flopping was transparent.
Many may not want Trump but many too should not want Romney, for his current efforts against The Donald are anything but altruistic.  They are selfish, and stubbornly subordinate to any claims otherwise.