Why is the Governor, aka The Artist Formerly Known as a Stalwart Conservative, so fixated on raising taxes? It’s a complete mystery. Governor Jan Brewer’s office and her Department of Revenue both responded yesterday to questions of exactly why they want to slam the state’s solar customers with a higher property tax, and their excuses were breathtakingly unconvincing.
The arguments are so lame that we’re forced to assume that she’s not protecting people from the tax because she doesn’t feel like it. Which is cool, after all she doesn’t have solar, and if her party takes a hit this Fall because Arizona’s retirees and homeowners are fundamentally opposed to tax hikes, so what? She’s outta here…. Anyway, let’s take a look at the blather:
1) Excuse: 2014 Governor Brewer can’t stand 2009 Governor Brewer.
“This equipment is being used to generate electricity for sale,” [Dept of Revenue spokesman Sean Laux] said. And that, he said, means they legally are no different for tax purposes than a power plant, solar or otherwise, owned by a utility. – East Valley Tribune, 6/5/14
First, it’s really weird to say a Glendale home with some solar panels and a trampoline out back is anywhere near the same category as a nuclear power plant. I mean, should the radio in my kitchen be subject to the same regulations as a nightclub? They are, as this Dept of Revenue guy would point out, both used to generate music.
Regardless, in 2009 when Jan Brewer had a hunch that solar was the perfect Arizona industry—and turned out to be right– she said very clearly that rooftop solar was not like these other things, and that regular folks and the nascent solar industry should not pay industrial-level taxes. Small government, pro-business, all that good stuff.
Now her office says they don’t want to “strong arm” her own Department of Revenue to get them to simply abide by Governor Brewer 2009.
That makes no sense.
2) Excuse: We must tax solar customers because… solar panels work when turned on.
Not to delve too deep in the weeds here, but the Department of Revenue’s argument for why solar should pay a property tax is that utilities pay the tax based on the fact that they sell power. Therefore, because solar leasing companies also sell power, they conclude, they too should be taxed.
Except for one thing: solar leasing companies don’t sell power at all—they lease the equipment, and the solar customers receive whatever benefit may come from using that equipment. 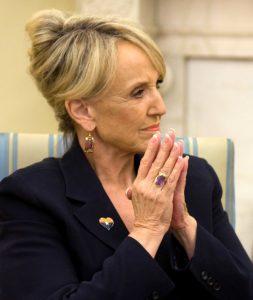 It may seem convoluted, but it’s also the law, and the Department of Revenue is pushing an interpretation that has no legal basis.
But the Department of Revenue’s Sean Laux does not care about no stinkin’ law, and insists it is not an equipment lease because….err, the solar equipment works:
“And they guarantee it and will actually pay you if it doesn’t” provide those results. “So it sounds to us as if you are paying for a certain number of kilowatts.” – East Valley Tribune, 6/5/14
By this logic, if you sell a TV and guarantee that it will work for three years, you’re not selling a TV, you’re selling time itself.
Sounds legit.
3) Excuse: Lowering taxes would be too…liberal?
“Inappropriate requests are being made of the governor to interfere and strong-arm the Department of Revenue,” [Gubernatorial spokesman Andrew Wilder] said. Wilder said that would make Brewer just as guilty of using the government’s taxing agency for political purposes as accusations that the White House leaned on the Internal Revenue Service to pay special attention to efforts by conservative groups to gain tax-exempt status. — Arizona Republic, 6/5/14
See, they tell us, we’re not like Obama! We’re just…. raising taxes on middle class homeowners.
Got it, thanks. You know who you’re also not like? Governor Brewer 2009.
4) Excuse: Governor Brewer is actually a minor functionary in Arizona government.
“It would be inappropriate for a governor to strong-arm the DOR’s regulatory decisions or interpretation of the law.”—Arizona Republic, 6/5/14
Inappropriate how? As the Chief Executive of the state’s government?
Good executives, in charge of directing state policy, don’t need to “strong-arm” the people they themselves appointed. They simply need to lead their teams to ensure that her government is acting in the best interest of Arizonans.
As the East Valley Tribune points out, there are precedents for the Governor, you know, taking control of a situation:
“It was Brewer’s executive order in 2012 that directed the state Motor Vehicle Division to conclude that those in the Obama administration’s Deferred Action for Childhood Arrivals are not entitled to state-issued licenses to drive. That order said that, as far as Arizona was concerned, the fact these DACA recipients were allowed to remain despite being here illegally and issued documents entitling them to work does not make them “authorized” to be in this country for purposes of being licensed. Prior to that order, MVD had taken no position.”
That was strong leadership in 2012. What happened to her?