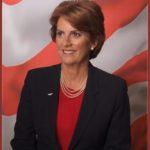 “I want to thank the NRCC for recognizing me as part of their Young Guns program. I believe that this district needs a strong leader who will stand up for Arizona, not stand behind the Obama administration and government bureaucrats as Kyrsten Sinema has done,” said Wendy Rogers.
She continued, “Kyrsten Sinema has failed Arizona. She said she would change the way things are done in Congress, but instead she has just given us more of the same. She voted against pay cuts for Members of Congress and banning their taxpayer-funded first class airfare. When the people of her district needed her most during the Phoenix VA scandal, she refused to lead. Instead, she stood by the bureaucracy, calling for hearings and studies instead of immediate action. Arizona doesn’t need a cheerleader for the Obama administration, we need a real leader. If elected, I will lead the way on policies to reduce the size of government, grow our economy, and protect our freedoms.”
Wendy Rogers is a 5th-generation U.S. military officer, having retired from the U.S. Air Force as a Lieutenant Colonel. She was one of the Air Force’s first 100 women pilots. She has made defending our veterans’ access to healthcare, education, and jobs one of her top campaign priorities. Wendy Rogers has been married to her husband, Hal, for 36 years. They have two children and two grandchildren.