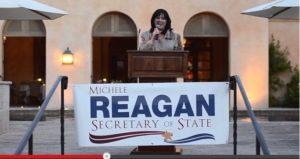 “I have been a friend and colleague of Michele’s for many years. From young republicans to the state legislature, we worked to make Arizona and the Republican Party stronger. I know Michele will make a great Secretary of State and will bring greater transparency to our electoral process.”

Michele has been a major advocate for election reform at the Capitol and has ran a variety of bills aimed at creating a more open and transparent system. Jim and Michele have forged a great working relationship on issues of government transparency and accountability.
“Jim has been a voice of fiscal responsibility since he was first elected in 2002, in the Arizona Senate and on the Phoenix City Council. He has continuously fought for what is best for the City of Phoenix and Arizona. I am very grateful for his support and look forward to continuing our close friendship.”