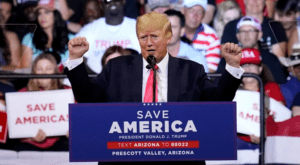 Photo Credit: Ross D. Franklin, APIt was already obvious that Arizona’s statewide campaigns were turning into a pro-Trump vs Democrats referendum. That is now becoming even more blatant and clear as Trump will be holding a rally in Mesa on October 9th.

Kari Lake and Blake Masters are singled out as the key benefactors of this benevolent visit by the former President, but also included is his support for the “entire Arizona ticket”. As a reminder, Trump gave official endorsements to Lake, Masters, Mark Finchem and Abe Hamadeh. All of them have expressed sentiment somewhere between beliefs that the election was outright stolen to grave concerns about the election. Election denial was the admission price to get his endorsement, and it proved to be a lucrative one, as all four candidates won their primaries.

While it is somewhat reductive to turn Arizona’s statewide races into a Trump vs. the Democrats dynamic, it is somewhat true as well. All of his statewide endorsees won; he demonstrated that he still has very significant pull with the Republican primary voting base. The question is, how will that play out with the Independent voter? After all, nearly all statewide races will likely have rather close outcomes, with the exception of probably State Treasurer, which Kimberly Yee is very likely assured to cruise to an easy win in.

Diagnosing “the Trump effect” is not easy these days since there has been no Trump sentiment polling amongst independents in the state. Moreover, I think we can all agree at this point that feelings about the former President are mostly calcified on the Republican side: you already know how you feel about him. However, his favorability rates near the primary amongst Republican primary voters in Arizona was hovering around 80%.

However, the more important impact of this rally is to…rally. Rally the base, that is. He has already cast his long shadow over Republican voters, and now it is time to rally his foot soldiers: to energize them, to get them ready to volunteer and get Republicans out to vote.

Joe Biden does not have a rally scheduled to energize Democrats, and it’s probably for the best. Few would consider his current speaking style to be inclined to amping up the electorate, and with his speaking style somewhat prone to gaffs, he could even do more harm than good. If we’re being honest with ourselves, he is simply not even close to as dynamic and engaging a speaker as Trump.

So when it comes to energy on each side as we head to the general election, it certainly does feel like it is Advantage Republicans.