U. S. Representative Trent Franks Says NO to Prop 480,
a 1.6 Billion Dollar Tax Increase
In an Op-Ed piece published in today’s Arizona Republic, Rep. Trent Franks explained why Maricopa County Taxpayers cannot afford prop 480. You can read his entire statement below:
Trent Franks: Health care already costs enough. Why is Maricopa County Integrated Health System piling on more?
Arizonans are painfully aware of the skyrocketing costs of health care.
Both federal and state governments continue to ask for more tax dollars to pay for Medicaid expansion and the Affordable Care Act. Taxpayers are contributing more than ever for health care for the less fortunate. 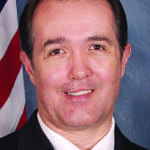 Those below 133 percent of the federal poverty level now qualify for Medicaid and those using an ACA exchange receive a heavy subsidy. These programs will be inordinately expensive.
Proposition 480, placed on the ballot by the Maricopa County Integrated Health System, fails to acknowledge these massive changes and the sacrifices taxpayers are already making by asking for a 27-year, $1.6 billion bond and tax increase for the old way of doing health-care business.
As a recent Arizona Republic editorial pointed out, the county hospital is a true safety net only for illegal immigrants because they do not qualify for AHCCCS or ACA, which raises the question of why only Maricopa County property taxpayers should pay for a federal responsibility.
Since Medicaid restoration and expansion began in January, more than 340,000 Arizonans have signed up, bringing the state’s total to 1.64 million and counting (25 percent of Arizonans). Arizonans who receive AHCCCS are free to use their insurance at a variety of private providers just like those with private insurance.
Unfortunately, Prop. 480 proponents give taxpayers zero credit for these enormous investments. They talk about health care for the poor as if we were living in a 1950 America, where the indigent were relegated to the county hospital. The paradigm shift to providing insurance for the poor vs. paying for the facilities calls for less government-run facilities, not more. It also provides the best health care at the most competitive price with the greatest dignity for the patient.
These changes are having noticeable impacts in the health-care market. In June, AHCCCS reported a 25 percent decrease year-over-year in uncompensated care. Private health-care providers in Greater Phoenix are exploding. Three of the top five hiring companies in Phoenix during September were health-care organizations.
Despite Prop. 480 proponents’ assertion that the poor are treated with dignity only at their facilities, AHCCCS patients are overwhelmingly choosing to use their insurance at private facilities. Private providers also serve the majority of uncompensated and charity care in Maricopa County. The most compelling evidence of these changes is that Prop 480 seeks to build a new county hospital, but only half the current size.
Rejection of Prop. 480 does nothing to stop the current services at the Arizona Burn Center or behavioral health services for the mentally ill.
Going forward, I’m confident our robust health-care system can create public-private partnerships for critical specialty clinics like these, at far less cost to the taxpayer than rebuilding every facility.
As Arizona continues to pull itself out of the recession, now is not the time to double our annual tax levy to a special taxing district which admits a declining role. We should develop innovative solutions leveraging our vast private health care market. I ask Maricopa County voters to join me in voting no on Prop. 480.
Trent Franks, a Republican, represents Arizona’s Congressional District 8 in the U.S. House.
Rep. Franks joins a growing list of business, civic and political leaders urging Maricopa County voters to vote NO on Prop. 480 For more information please visit our website, www.VoteNOon480.com.