If Arizona Attorney General Tom Horne is not investigated by someone for what appears to be a blatant misuse of taxpayer dollars to aid his own election, we are not sure what the point of any campaign finance law is. 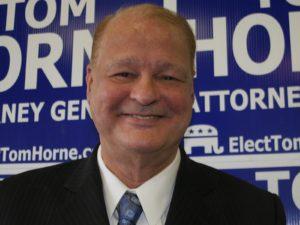 While some of these laws can be complex, the prohibited use of taxpayer dollars and government staff to assist one’s private election pursuit is not. And, it is among the most critically important election laws of all.
Horne wants us to believe it is coincidence or merit that has led to well-known Republican political, media and fundraising operatives onto his staff. All of who just happen to be working on his challenging re-election campaign. And this doesn’t include a $300,000 advertising contract just awarded by the Attorney General’s Office to one of Horne’s political consultants.
The embattled incumbent has resorted to these tactics because of lackadaisical ethics but also because of weak fundraising numbers.
He simply cannot afford to pay market rates for capable campaign help so he has found what is at best an inappropriate way and at worst an illegal one to lay these expenses off on all Arizona taxpayers that fund the Attorney General’s Office.
It is outrageous. There have been plenty of times going back many years when Chiefs of Staff and other aides participated in the campaigns of the elected. But there has been nothing this brazen.
Everyone with an iota of political sophistication and campaign experience knows what’s taking place. The question is whether those who have the power to make sure it doesn’t happen again do something about it now.