Scott Smith and Christine Jones have spent considerable time and resources attempting to smear the business transaction involving my partner’s and my sale of Cold Stone Creamery to Kahala Corp, but their allegations are simply not true. The fact is that both parties were pleased with the transaction and I continue to enjoy an outstanding relationship with both Cold Stone Creamery and Kahala Corp. today. 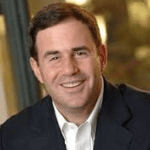 Former Kahala Corp. CEO Kevin Blackwell led the purchase of Cold Stone Creamery from my partner and me in 2007. He released the following statement in light of these recent unscrupulous attacks on the transaction between Kahala Corp. and Cold Stone Creamery:
“As the CEO of Kahala, I was the lead negotiator on Kahala’s purchase of Cold Stone Creamery in 2007. In that transaction Doug Ducey and his partner sold their ownership in Cold Stone Creamery to Kahala. The recession arrived shortly after Kahala’s purchase, adversely impacting the business and leading to a renegotiation of some of the terms of the deal. Such things sometimes occur in complex business transactions and I can happily say that our negotiations were resolved to the complete satisfaction of both parties. Cold Stone was, and is, a terrific company and I was, and am, proud to have been associated with the Cold Stone brand. While Doug and I had our differences during ‘the heat of the moment,’ Doug built Cold Stone into a great company and would make a great Governor for Arizona.”
Cold Stone Creamery has been a model franchisor, including being ranked #1 franchisor by Phoenix Business Journal and receiving the W.P. Carey School of Business’ Spirit of Enterprise Award, Arizona’s premier recognition of entrepreneurial excellence. I was also honored to be inducted into Arizona State University’s Business School Hall of Fame.

Take it from those of us who actually sat at the negotiating table – it was a regular transaction in which both parties walked away content with the outcome. That is the real story, regardless of insinuations to the contrary by my opponents.
I’m proud of my record at Cold Stone Creamery and of building a brand that is known and loved around the world. And I’m tired of my opponents’ attempts to tear down free enterprise and bash the pursuit of the American dream. Let’s talk about the issues that matter to Arizona’s voters – like kickstarting our economy, creating jobs, improving education outcomes and working to secure our border.
Sincerely,
Doug