Besides God’s work in the McDowell Sonoran Preserve perhaps the two most talked about creations in the city, albeit man made, are Taliesin West and the Indian Bend Wash.
One was the winter home of Frank Lloyd Wright, the other municipal magnificence to create a striking recreational amenity rather than a concrete flood control bin like the Los Angeles River.  Both took extraordinary visions and guts.
But so did a couple of other Scottsdale things we believe history books will rank in a similar class. 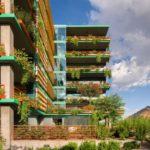 The first is next to Fashion Square, Scottsdale’s hanging gardens of Babylon, Optima Camelview.  It’s a project so striking that ESPN even used it as backdrop during the last Super Bowl.
At a time when some in the city are lamenting too many multi-family projects Optima reminds us what design excellence truly means.  Part Blade Runner, part Arcosanti and part Desert Botanical Garden it will surely long stand as one of the finest developments ever approved by a City Council. 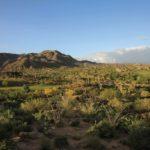 The architect of Optima Camelview, ironically, leads us to our second recognition:  Desert Mountain.  You see, that’s where David Hovey decided to call his Scottsdale home.
It’s not hard to understand why.  Found at the northern tip of Scottsdale abutting the Tonto National Forest it was originally envisioned by Lyle Anderson.  It now stands with not one, two, three, four, five but six Jack Nicklaus designed golf courses. It is the best golf club in the world.  And it’s right here in Scottsdale with a final phase called Seven now under construction.  Desert Mountain is an unrivaled mix of summer (or winter) camp combined with life’s finest luxury elements.  Because it has few if any peers on the planet Desert Mountain is the engine and envy of any economic development organization.  It is recruiting the well-heeled from around the world.  As residents.  As members.
Taliesin West.  Indian Bend Wash.  Optima Camelview.  Desert Mountain.
We should probably add DC Ranch and Silverleaf to that list.  But that may be a post for another time.