(SCOTTSDALE, Ariz.) — One of the most recognizable polo events in the World is now in the books for 2020. The reconfigured, Stella Artois Polo Classic: Presented by Kettle One wrapped up a day of festivities Saturday, November 7th with new victors, and rave reviews from attendees for the socially distanced setting at WestWorld of Scottsdale.

As part of the City of Scottsdale approved changes for 2020 and after receiving certification from HealthyVerify (a consortium that includes Arizona State University and Barrow’s Neurological Institute) the Stella Artois Polo Classic returned with a reduced capacity of 3,132, which sold out. The event featured an extensive social distancing plan, mandatory masks for guests, sanitation stations, temperature checks and unlike previous years an all open-air approach with tables, lattice fencing and umbrellas instead of tents to make guests as comfortable as possible in an environment that was still as fun as possible.

The day kicked off with Valley favorite Scottsdale Maserati’s Arizona Polo Club victorious over Mark Taylor Residential’s Denver Polo Club 6 to 5. Diego Florez scored 4 of the Arizona team’s goals and he like others said that even despite the changes for 2020, the event lived up to his usual expectations. 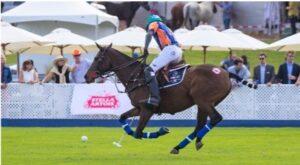 “As always the 2020 Stella Artois Polo Classic was very well put together to allow for social distancing, but still enabled great entertainment for spectators who love polo, horses, canines, fashion, and much more,” said Florez.

“Celebrity Cruises was thrilled to be part of The Stella Artois Scottsdale Polo Classic this year and even more thrilled that in our first year participating we won the Molina Cup in a hard-fought 6 to 4 victory. The Polo Classic offered something for everyone and is an outstanding event. We look forward to defending our title next year,” said Tareq Salahi, USA Team Captain.

“This is was our third time coming to Scottsdale for this incredible event and it just gets better every year,” said Shariah Harris, member and alumni of Work to Ride. “Even though there were COVID limitations for safety, this year’s event was still a great experience. We always love coming to play in Scottsdale because the players and people are always so welcoming and we are looking forward to coming back for another year.”

Fans also enjoyed a variety of shows within the show including Phoenix Fashion Week’s Longest Catwalk Fashion Show, as well as the Canine Couture presented by Lugari Pet Salon which gave 35 canines a chance to compete for prizes. 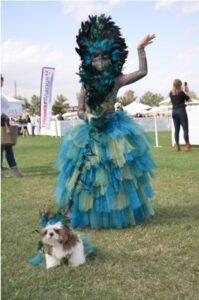 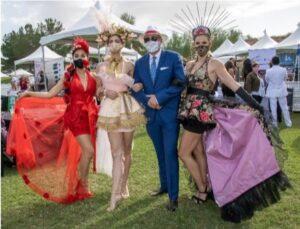 The following charities were also able to raise money through the event for their programs and services; Phoenix Chapter of African American Scholar Athletes, Phoenix Children’s Museum, Hoof and Paw Rescue, and Vision Lake Consulting.

As currently planned, the event will return as The Bentley Scottsdale Polo Championships in November 2021.

For more information visit www.thepoloparty.com. Interested groups and sponsors for the 2021 event should contact Leslie Owen at info@thepoloparty.com or by phone at (480) 577-4156.

For media inquiries please contact Jennifer Parks-Sturgeon at (480) 495-3806 or by email JParks-Sturgeon@RoseMoserAllynPR.com.