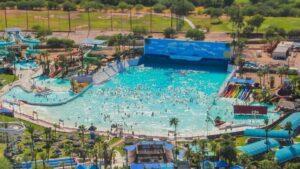 Photo Credit: All About Arizona News

We should be used to it by now as Arizonans, an area where the only constant (other than hot summers) is change. Yet every once in a while, a closure and repurpose of a once hallowed site, an instance of paving paradise to put up a parking lot in the immortal words of Joni Mitchell, still punches the gut.

Such is the case of both the Big Surf Wavepark as well as the Inlands Ocean Ice Rink in Tempe, both of which are being sacrificed to the gods of economic development. As demonstrated by a recent unanimous vote to move forward, it appears as though both will soon be torn down with warehouses to be put up in their place by a California-based developer.

We certainly are fans of free enterprise and economic development, but that doesn’t mean that we aren’t disappointed by certain instances of it in play. After all, those two (and more specifically Big Surf) were true mainstays of the Valley. For anyone of a certain age who grew up in the area, it was a right of passage if not a frequent destination. An incredible amount of memories happened within those confines, memories that will now be replaced by an industrial park.

Frankly, this is more than just memories, this site represents a significant part of history. After all, Big Surf was the very first wave park in the entire country. In a state that is defined by brand new and shiny, by people born elsewhere coming here for the next chapter in their life, we have had precious few of these sorts of historical landmarks.

It has been a bad year for similar local icons in the Valley. After all, anyone who went to Arizona State or simply liked to join the party on occasion is well aware of The Vine, a classic bar and eatery that recently closed up shop after 36 years. This is in addition to the Wild Horse Pass Motorsports Park and the Circle K made famous by the cult classic movie “Bill and Ted’s Excellent Adventure”.

Progress can be painful. Our state may be turning into an economic juggernaut, but that comes at a price, and that price seems to be the death of the source of great memories. We hope you take a few moments to bask in those memories before those too fade away.