It is no secret that the US Department of Veteran’s Affairs has been dealing with a scandal or two. Thanks to whistleblowers like Dr. Katherine Mitchell, the internal issues came to light as well as the shocking knowledge that our veterans are not receiving the proper care they deserve. 50 veterans passed away due to lack of care.
Sen. John McCain has worked tirelessly to improve the Phoenix VA, even to the point where he begged President Barack Obama to come and see the scandalous activity for himself. As a veteran, McCain has made it his mission to clean up the VA and ensure that all veterans receive the care they deserve. 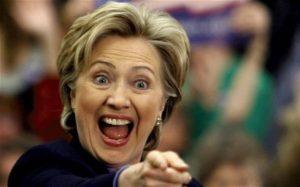 Hilary Clinton seems to disagree that the issue at hand is at a scandal level and is more at an uh-oh level. She believes that the whole thing was blown way out of proportion and that it wasn’t as bad as it was made out to be. With the election coming up next year, it is good to know that the lives of veterans are not high on her priority level.
The next question to ask is: How many veterans have to die from lack of proper medical care in order for an issue to be worth her time? 100? 500? 1,000? These are men and women who have risked their lives and lost limbs so that she has the right to say that the scandal was overblown. This must be her way of saying thank you.
Clinton is basing her beliefs on a survey completed by veterans who were actually given care in 2013. The problem with these surveys is that they were given to the veterans who had no issue getting appointments and receiving care.
If she based her beliefs on the survey taken in 2014, she would see that the number declined from an 83 percent satisfaction rating to 55 percent. Also she would see that 70 percent of the VAs nationwide falsified information.
Of course, Clinton doesn’t have any ideas on fixing the issues within the VA, because she doesn’t see any.
It would not be shocking if her supporters think twice about voting for her unless she changes her attitude towards our veterans. Veterans are the reason she can even run for president and she should keep that in mind when voicing her opinions and should remember that 14.7 million veterans voted in 2012.