As the travails of Arizona Attorney General Tom Horne continue, at least until he is voted out and down by state Republicans on August 26th, the honor and duty of law enforcement counterpart Bill Montgomery is a reminder that it didn’t have to be this way.
Perhaps it is Montgomery’s military background. Perhaps it is a m 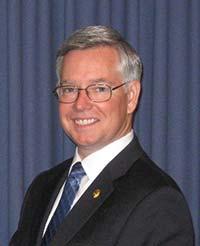 oral compass that focuses on the destination, not on the journey. Perhaps it is that Montgomery is appreciative of the office, not expecting to be there. After all, it took an Andrew Thomas departure and an overcoming of Rick Romley to get where he is, albeit with substantial help from Sheriff Arpaio.
But even among Democrats and those who oppose Arpaio and opposed Thomas there is a deep respect for Montgomery, even while they disagree with him.
And beyond all of this one gets the sense that if Bill Montgomery were not the Maricopa County Attorney he would be serving another way, as he already has his country. Or he would be succeeding in private practice. In other words, he is a person more than whatever title he holds, comfortable in his own skin.
Compare this to Horne. It’s as if he never went to prom and has been trying to make up for it ever since. Trying to get ahead financially back east before being banned for life from the securities profession for violations. Or running a racially-tinged campaign versus former State Superintendent of Public Instruction Jaime Molera so his title could be grander than that of Sue Gerard’s disciple in the Arizona State Legislature.
But the ongoing, latest shenanigans from so obviously employing campaign workers at taxpayer expense within the Attorney General’s Office to dressing up Halloween-like for nooners on 7th Street to escaping dubious conduct during his 2010 race, suggest a carnal instinct to hold onto title, rate for even the most ambitious.
Should anyone really want to win so badly, rather than just honorably step aside? Why should anyone feel such sanctimony and need, unless they are just so deficient?
The only good that has come out of Horne’s ridiculousness is the juxtaposition it provides with Montgomery, one of the Arizona Republican Party’s brightest stars and a reminder what can be good and right and just about those who seek office to sound alarms, make a difference and hear horns other than theirs.