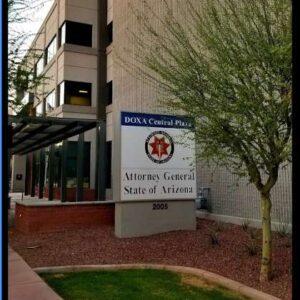 One common theme in many of these races that we’ve covered and will cover on The Breakdown is the fact that most of these races are open seats, making them more interesting to cover. The first Breakdown of a more top-ticket race, the race for Attorney General, is no different since incumbent Mark Brnovich is vacating the seat for what will likely be a Quixotic and unsuccessful bid for the US Senate (we’ll cover that later though).

First we will look at the Democratic side, and unfortunately, there won’t be many fireworks there. Former Republican member of the Arizona Corporation Commission Kris Mayes announced that she switched parties a few years back, detailing how the party had left moderates like her. With legal experience and a deep rolodex, she announced a run for AG and has shown solid fundraising chops, with nearly $575K raised and the strong majority remaining as cash on hand. Former County Attorney candidate and state legislator Diego Rodriguez had jumped into the race previously, but despite some time in the Capitol his fundraising totals were paltry, and combined with likely some party pressure (probably fueled by some…errr…indiscretions) he wisely bowed out of the race. For previous County Attorney candidate Bob McWhirter, best known in local politics for having used the N-word as a professor, his run for AG was brief and went away as quickly as it appeared  So the pathway for Mayes to head to the general election is a simple and easy one; she will be the only Dem on the ballot.

The real interesting aspect of this race is the burgeoning bloodbath forming in the Republican primary. SIX CANDIDATES have made it through the signature gauntlet and will be on the ballot, some more valid than others. There are two tiers insofar as fundraising is concerned; first, we’ll mention the have-nots. Former Gila County Deputy Attorney Lacy Cooper has a mere $36K cash on hand (CoH), and Tiffany Shedd, best known for a close loss to Tom O’Halleran in her 2020 race for Congress, has a more respectable but still light $123K CoH. Neither is likely to come out of this primary still standing.

Now we will talk about the elephant in the room: career candidate Rodney Glassman. The former Democrat (who actually tried to run to chair the Arizona Democratic Party twice, and switched registration merely weeks after losing the second time), then Independent, then Republican…a candidate for US Senate, Tucson City Council, Arizona Corporation Commission, Maricopa County Assessor, as well as an attempt to be appointed as Maricopa County Attorney….is now running for AZ Attorney General (did we miss any races?). We would LOVE to dismiss this candidacy outright, but being the offspring of a very wealthy family has some serious benefits, apparently including an endless rolodex of wealthy potential donors. His nearly $1.8 million raised and nearly $1.5 million CoH is daunting. Perhaps voters will have memories of past attack ads about him; we assume that he won’t be directing his own campaign videos anymore unfortunately.

Next is Andrew Gould, retired AZ Supreme Court justice, who while diminutive in nature and perhaps short on natural charisma has made up for it with surprisingly strong fundraising, having raised over $1 million with over half a million CoH. He has been taking it upon himself to go after Glassman aggressively, and will have the funds to do so now. Dawn Grove is corporate counsel for the PING golf dynasty (which her family founded), making her perhaps a little closer to Glassman regarding background (sans the addiction to running for office). While her experience is likely a stretch, to go from your family’s corporate counsel to state AG, her numbers of over $1.2 million raised and over $1 million CoH demonstrate viability.

Perhaps the strangest wild card of this race is Abe Hamadeh, a former MCAO prosecutor and US Army Reserves Intelligence Officer. Abe seems to have come out of absolutely nowhere yet recently pulled in the coveted Donald Trump endorsement. We can’t verify his age but doesn’t look to be pushing too hard on 40, yet has managed to raise over $1.25 million and keep over $1 million of it CoH however. We have some questions about how a young first-time candidate was able to raise that kind of money and get such significant support so quickly…truly impressive, yet very strange. That said, he is clearly a major contender

In a six person race, 25% will likely be enough to win. So who gets there? Unfortunately, Glassman has all of the name ID that he has gained in his 41 runs for political office, and to the average voter, most of it isn’t likely negative. Polling still has it as a toss-up, but that was before Trump’s endorsement of Hamadeh. Gould likely has the resume that will appeal to GOP voters, and combined with a strong cash position may be enough, but we feel like this will truly be an incredibly competitive race with three names within a tight range. It is truly too close to call.

If Glassman or Hamadeh make it to the general election, they will still have an ocean of money to spend against Mayes, which bodes well for their chances. Gould will have to build back from nearly zero if he wins, but in a year that is leaning towards Republicans, it is likely that whomever survives the GOP bloodbath will be our next top attorney.

As for next week we will dive into the head of our elections, the person who is a heartbeat away from the 9th floor, and the magnet for conspiracy theories: Secretary of State.