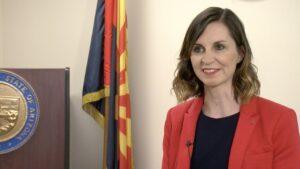 In this week’s Breakdown, we are going to take a look at the race to be the head of Arizona schools. The State Superintendent of Public Instruction. This race was one of the biggest surprises of the 2018 election cycle, as 31 year old teacher Kathy Hoffman, someone with no political experience before her run, knocked off former State Senate Minority Leader David Schapira in the Democratic primary, and then disposed of perennial candidate and spectacular weightlifting bro Frank Riggs in the general election. While she will have an easier road in the primary, a more difficult road awaits her in the general.

Hoffman’s time in office has been relatively uneventful, at least insofar as press attention goes. Towards the beginning of her term she tallied up a number of socially progressive wins that certainly pleased her followers, but all that has been largely forgotten as education policy has been completely encompassed by Covid through the majority of her term. Some areas that had a much more powerful and activist teacher’s union infrastructure and progressive leadership which led to shuttered schools for entirely too long dealt with subsequent political consequences, such as that seen in Virginia. However, this is Arizona.

Our teacher’s unions (which endorsed Schapira in the primary) are largely toothless and Hoffman’s office had little sway to dictate whether or not schools were open. As such, it seems as though Hoffman has mostly been a side note in Arizona politics for the last few years, which is likely to her benefit. It is not a stretch to believe that she would have listened to the more progressive voices calling for closed schools, which would have certainly led to consequences. She was likely saved by a lack of power.

Unlike 2018, Hoffman faces no primary opponent, so she has the luxury of using her primary funds to get ready to the general; she is a Clean Elections candidate, and she recently received a $110K check “for the primary” as a result, and will receive a check of around $166K for the general. That was enough in 2018, but for 2022? Now we check out the Republican side…

There are a number of Republican challengers, but only two have any significance: Michelle Udall and Tom Horne. Udall is a State Representative with one of the most respected names in regional politics. Normally she would be considered a strong candidate, but with shockingly tepid fundraising and a $125K independent expenditure group poised to defeat her, she has nearly become an also-ran, which brings us to the Big Dog in the race… Tom Horne.

Horne certainly has no shortage of experience, having spent eight years in the role previously, so stepping into the role with competence will be no problem. His more recent political history has been dogged by a somewhat scandal-ridden time as Arizona AG leading to a later primary loss against Mark Brnovich. That said, money talks and nearly everything else walks. Horne has raised a daunting amount of money for his campaign: nearly 2/3rds of a million raised with nearly $400K cash on hand. With an IE doing the dirty work of disposing of his closest competitor, he may bring most of that cash with him to the general, which would lead to a strong cash advantage against Hoffman.

Can Hoffman survive a general election while being outspent? She never had to worry about that in 2018, and as the Red For Ed passion is long gone and public sentiment moving against teachers, it is clearly not the year to be an outspent Democrat in Arizona. Perhaps her only saving grace will be strong turnout for Democrats based on an overturning of Roe vs Wade. Without that, Horne would clearly have an advantage. With that, we call it a Toss Up, and one that should be a truly interesting race to watch in November.