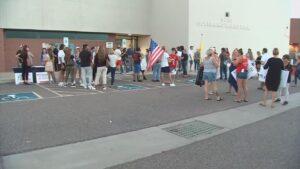 Could it be? Common sense reigns over irrational anger? Someone get the fainting couch, I am getting the vapors!

Yes, it is with a certain degree of jubilation and relief that I can announce that the four attempted recall elections of Scottsdale Unified School District Governing Board members have all failed, None of them got the nearly 20,000 signatures necessary to bring it to a public vote. All of them DOA.

We have written about this misplaced adventure before, the result of a toxic combination of rage against reasonable Covid-prevention policies as well as the boogeyman of Critical Race Theory, The angry mob came after 4 of the 5 governing board members (the only board member exempted was Zack Lindsay, which says more about him than the other 4 members) in a ridiculous, quixotic demonstration.

That said, it’s very easy to start a recall attempt; the most work it involves is writing a paragraph describing why you’re attempting to recall an elected official (if you believe that’s hyperbolic, we invite you to check out the school board member recall filings here). It is slacktivism: it gives people the feeling of doing something important and impactful without really doing anything.

It makes them feel good…until the inevitable failure, because getting 20,000 voters in Scottsdale to sign your petition based on the premise that you don’t like this school board member and neither should they is a LOT of work. Very hard work. You need literal platoons of volunteers or a six-figure bank account. Anyone who has ever done work to get a candidate on a ballot, who has talked to hundreds or thousands of strangers looking for their signature could have told you that, but I doubt that any of these people have. Or maybe they just wanted attention and didn’t care if it succeeded.

If this effort had any brains behind it, it would have immediately stopped all work on the other 3 candidates and focused 100% of its efforts on Jann-Michael Greenburg after his fiasco came to light. Not just stopping all work, but literally terminating the other recall attempts. With focused efforts on the one true problem in the SUSD Board, they might have had a chance to affect some positive change out of this dumpster fire and not look like fools in the process. But I suppose that asking for strategic wisdom out of the rocket scientists who started this mess in the first place was asking for far, far too much.