There exist three and a half noteworthy downtowns in the Valley. Phoenix, Scottsdale and Tempe, with the half going to Glendale. Mesa’s doesn’t count as it is a beautiful performing arts venue surrounded by Fallujah. Chandler is making a move thanks to San Tan Brewing Company but still has quite a ways to go.
That brings us to Tempe, which is clearly separating itself from the others. The amount of development velocity underway is remarkable, a perspective that should be appreciated but a bigger picture that can be lost among the almost daily announcement about new stuff. 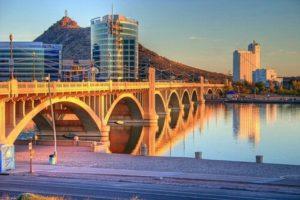 John Graham’s SunBelth Holdings and Marina Heights.
An attractive redevelopment of the Monti’s restaurant site.
A compelling new development vision for the Hayden Flour Mill.
The whirling dervish that is Arizona State University.
Even the Chinese are purportedly looking to get in on the action on the other side of Rural Road along Town Lake.
Some of these projects importantly offer quality new hotels which the area lacks in near embarrassing fashion.

The bigger projects can get the most notoriety, as they offer great reward and great pitfall. But Tempe should never forget the University Heights plan at the height of the boom that saw the elimination of an entire city block and numerous small businesses for such a big project that never came along.
However, it is a migration of another sort that speaks to the area’s renaissance.
Back in the early and mid-1990s Tempe bars set the pace for the coolest scenes in the Valley. They were the homes of a nationally renowned music scene led by the Gin Blossoms, Refreshments and Pistoleros.
Then Scottsdale became cool with a flush of new nightclubs and bars that would be the envy of any city’s downtown. Money flowed north.
And while downtown Scottsdale remains remarkable and downtown Phoenix has evolved from desolate to mildly interesting, it is Tempe that is best seeing reinventing reinvestment. Money is flowing south for the winter, and all other season.
Postino, Sam Fox, El Hefe, Whiskey Row. These have been Phoenix and Scottsdale trophies. They are now seeing what the game in Tempe is all about.
Without the local flare big rarely means better over the longer term. It simply looks like Anywhere USA, homogenized. But what Tempe is experiencing now is truly remarkable.
It is a decades-long vision for Town Lake that successors bought into and advanced. The combination of projects big and small are making Downtown Tempe, Mill Avenue, ASU Extended, or whatever it is called a uniquely great, good place.