According to the owners of Tempe’s famed Yucca Tap Room, things are awry and city officials want their property. The Republic has some background on the situation. Click here.
The one-time platform of Roger Clyne and many other local music aspirants, the distinct bar is something to be celebrated and assisted, not run over as appears the intent of city bureaucrats. 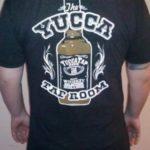 What a shame. And what a reminder of a similar show we have seen before. In Scottsdale.
There, over a decade ago a conspiring city and developer wanted to condemn the city’s oldest tavern, The Coach House, and give it to a neighboring property owner for a bland mixed-use project. The odds were stacked against the small business as a pro-developer council majority seemed assembled. But then the locals and regulars rallied. The uprising was such that whatever majority existed evaporated as one colorful citizen after another entreated for relief. And The Coach House got it. And there it sill stands, an important reminder of Scottsdale’s history and one of the best watering holes in the Valley. Thank goodness.