TEMPE, AZ – U.S. Congressional candidate Andrew Walter today announced the endorsement of Corporation Commissioner Susan Bitter Smith. Susan has served her community as a Scottsdale City Council member and Vice Mayor, is a past president of the ASU Alumni Association, and ran for Congress in Arizona’s Fifth District. 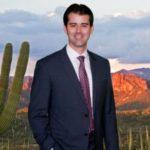 Susan Bitter Smith has a great deal of experience in the private sector and serving as an elected official. Regarding Andrew’s campaign for Congress, she said:
“Just as he led ASU Sun Devil Football teams, Andrew Walter is ready to lead on important issues to Arizonans. His business experience in the private sector makes him uniquely qualified to advocate for less government regulation into private business as well as to be a champion for tax reform. I am proud to endorse Andrew Walter in the Republican primary for Arizona’s 9th Congressional district.”
Andrew Walter stated “I am grateful for Susan Bitter Smith’s endorsement and it’s an honor to have her support. She has an exceptional record as a leader in both the public and private sector. Her level of involvement in the community and our state is unrivaled and I sincerely respect her commitment to hard working Arizonans.”

About Susan Bitter Smith
Susan Bitter Smith was elected to a four year term on the Arizona Corporation Commission starting in January 2013. She is a member of the National Association of Regulatory Commissioners, currently serving on NARUC’s Water Committee and as President-Elect of the Western region. She is serving as Executive Director of the Southwest Cable Communications Association since 1980 and as Vice President of Technical Solutions since 1988. She earned both undergraduate and graduate degrees in Business Administration from Arizona State University and is a Past Chairman of the ASU Alumni Association. In addition, she serves as the Honorary Chair of the ASU MBA Alumni Association, is a Past Chairman of the Walter Cronkite Foundation, Past Chairman of the Arizona First Amendment Coalition, and is the Chairman of the Arizona Competitive Telecommunications Coalition.
About Andrew Walter
Andrew Walter is a native Arizonan and starred at quarterback for Arizona State University (ASU) where he earned a BA in Communications. Andrew was selected in the 2005 NFL Draft by the Oakland Raiders and finished his career with the New England Patriots. Following his professional sports career Andrew earned his MBA from ASU, with an emphasis in finance. Andrew has had great success in the private sector as the Principal of Andrew Walter Holdings, a senior secured lending firm, and as a credit analyst for MidFirst Bank.