Although it won’t be for almost a year we regret Paradise Valley Town Manager Jim Bacon is stepping down. He has served with humor and effectiveness.
Arriving in Paradise Valley at just about the hour of the day of the year when the economy cliff-dived we can envision few better captains in stormy seas.
At ease with his extensive experience and with a quick wit always at hand Bacon inspired confidence because he has pretty much seen it all in municipal government. Comfortable in his own skin there is no discomfort coming from anyone wondering if town government is operating with integrity and achievement. 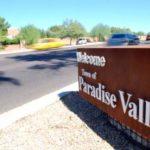 He proved himself to be a critical deal-maker too. We question whether someone without Bacon’s talent, patience and standing could have negotiated the deal that has become the old Mountain Shadows resort revitalization in progress.
The accomplished town manager deserves the more relaxed times coming to him. And while he will be missed at Paradise Valley Town Hall we know he will enjoy more times watching his beloved sporting events, knowing his was a job well done.
Next door in Scottsdale we hope the activists win. They have it right. As we lament the loss of a consummate public servant like Bacon, Scottsdale’s political vocalists don’t want to lose an interestingly designed church in downtown, on Indian School Road. It has served as a city office and meeting place for some years. City Manager Fritz Behring is rightfully looking at ways to raise additional revenue through the sale of non-essential buildings. But the Community Design Studio, as it is now known, should not be sold. As Councilwoman Milhaven has opined, Scottsdale has relatively few older, appreciated buildings so why not maintain this one, since it can?
And the city should. With a twist.
The city can achieve a win-win with continued ownership but it should seek bids from Scottsdale’s many enterprising restauranteurs and small businesses to utilize the space for a private sector use with limited design changes. We understand some of the city’s most notable chefs have already approached the city about the possibilities. Anyone who has visited what was a similar looking old church at 7th Street and Osborn that has been since been redeveloped into the Taco Guild will understand how terrific the possibilities are.
“Activist” has become a dirty word for the most part in many cities. But certainly not on this issue in Scottsdale where they raised the concerns about a sale but will hopefully be the first to salute a lease for a new use on the edge of downtown that could use a bit more life.