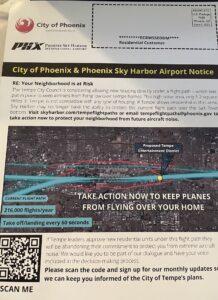 As reasonable capitalists, or at the very least not communists, we hope for a government that is reasonably limited. We prefer that government doesn’t unduly hurt the business climate, as unreasonable red tape and bureaucratic nightmares are readily available one state to the west for those who want it. For the most part, Arizona has been a beacon of reasonably limited government, so we were perplexed and disappointed with this recent development.

It was recently reported that the city of Phoenix, through Sky Harbor airport, is attempting to make life very difficult for the Arizona Coyotes in their proposed move to Tempe. Indeed, not unlike a dark money group attempting to defeat a candidate who dares stand in the way of their interests, they have executed on a widespread mailer campaign to homes in the area full of scare tactics regarding the purported need to change flight routes and introduce airplane noise to neighborhoods if the plans go forward.

This isn’t the first time that the city has decided to wield Sky Harbor as a weapon to further its interests. Perhaps some of you will remember when they decided to levy punitive fees on rideshare companies while reducing fees for taxis in what could only be interpreted as a sweetheart deal designed to help the taxi industry. But while the purpose for that government overreach was clear, it is less clear as to what has created these sour grapes.

Never mind that the proposed entertainment complex doesn’t include gigantic skyscrapers that would divert traffic. Nevermind that there are plenty of other tall-ish buildings, entertainment areas and the like at a relatively similar distance to the proposed site that have created no issues for the airport in the city of Phoenix. This certainly has the smell of a pure power play, of government bullies getting in the way of serious progress.

In response, Mayor Corey Woods released this statement; well written, dignified, and indicative of why the voters of Tempe trusted him to lead them. While we generally have been supportive of leadership in the city of Phoenix save a particular bomb-throwing councilman, it feels like Tempe leadership is acting like the adult in the room as opposed to the little brother position that they have often had compared to their big sister to the west.

We are not sure why Phoenix is doing this; we can speculate about jealousy, about lost tax revenue, about personality conflicts, about competition…but it is purely speculation. Regardless of the reason, Phoenix needs to drop the sour grapes immediately, stop getting in the way of progress and focus on making their own city more amenable to private enterprise. This is a bad look for them.