Driving through north Scottsdale these days can bring a twinge of sadness. The beloved site that once housed the city’s most enduring watering hole, Greasewood Flat, is now being bladed for new homes. The same fate is set for the acres once hosting Pinnacle Peak Patio. 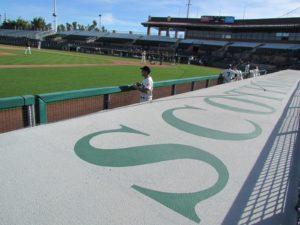 Sure, businesses come and they go. But the inability of these particular owners to soldier on was a blow to the soul of Scottsdale itself. But the Scottsdale City Council is not to blame. If long-time businesses can’t evolve with changing times and tastes, government should not – and cannot by state law – step into help.
But what the city can do is invest in public facilities that make Scottsdale shine.
Some criticized large new facilities at WestWorld and to be fair there were cost overruns. But since they have come online the number of events at Scottsdale’s Central Park have increased substantially. And its signature events – Barrett-Jackson and the Scottsdale Arabian Horse Show – have seen even more growth. That’s not just important because of dollars and cents. These essential events showcase the community around the world for a profoundly positive impact, known and unknown.
City gadflies like John Washington took aim at reinvestment in another city facility, the Tournament Player’s Club. Last week, the Waste Management Phoenix Open set an all-time record for attendance and saw Saturday attendance that eclipsed even the Kentucky Derby. “The People’s Major” was a coup when recruited by former Mayor Herb Drinkwater decades ago. And it remains one of the city’s greatest ways to smile to the country.
Spring training arrives in just a few weeks. There at Drinkwater and Osborn sits our Fenway Park, Scottsdale Stadium. At nearly three decades old it too will need more upgrades soon beyond the new scoreboard to debut this year. Is that something the city should likewise reinvest in for and with the winners of three of the last six World Series’? Absolutely.
Some old traditions may be gone but Scottsdale sensibility means others soldier on. Thank goodness. Job well done Mayor Lane & City Council.