We didn’t start this opinions courtyard years ago to belabor Bob Littlefield, a former Scottsdale City Councilman and failed Republican candidate for the Arizona State Legislature.
But his fodder has just become so rich, or rather so mendacious.
His hypocrisy knows no bounds.
He was for the Desert Discovery Center before he was against it.
He voted for the tallest and densest project in Scottsdale history before proclaiming he’s against such things.
He says he is for the people yet voted with powerful development interests to take away citizen’s rights when they wanted to challenge his support 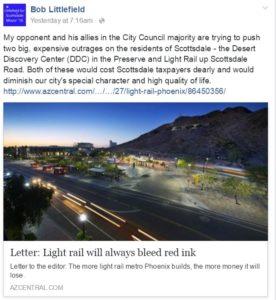 for them.
We could go on.  And on.  And on.  Which is why it’s necessary to write about Littlefield so much.  He’s the ultimate politician.
But his latest campaign deceit may be the most repulsive yet, even worthy of a new nickname:  Lyin’ Bob Littlefield.
We hate to co-opt Donald Trump’s moniker for primary opponent Ted Cruz after his campaign was so dishonest about Ben Carson, but it’s justified.
Just take a look at this social media post from Littlefield on June 29th.
We get exaggeration in political campaigns.  But Littlefield just flat out lied about Scottsdale Mayor Jim Lane on light rail.
Lane has repeatedly voted against light rail plans and proposals his entire time on the Scottsdale City Council and as Mayor.  He even did so just last month.  Lane was in the majority quashing plans for Scottsdale light rail. So how can Littlefield claim otherwise?  Only with a stunning lack of integrity that comes with a flailing campaign.  Littlefield knows better.  He should be better.
His claims about Lane on the proposed Desert Discovery Center are nearly as bad.  Lane supports a public vote on the project.  In fact, this is how he has laid out his position:
Public Needs Final Say On Desert Discovery Center
“The public should decide whether or not the Desert Discovery Center is built on McDowell Sonoran Preserve land and/or use Preserve funds. That’s my position. I want this process to be up front and transparent on this issue because that’s what our residents deserve before the city spends tens of millions of dollars on the project.”
If Littlefield’s numerous flip-flops, hypocrisy and anti-business positions (which are almost autarkic) weren’t disqualifying enough, his latest antics surely do the trick.