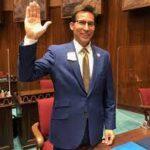 Freshman state legislator Joseph Chaplik, who represents the old legislative district 23 (covering most of Scottsdale and Fountain Hills) is no stranger to attention. In fact, it often looks like he actively seeks it out. So when he authored an elections bill into a very friendly hopper, it appeared as though he might have a chance to loudly tout a big victory. After all, Governor Ducey has signed 25 election-related bills since last year, so smooth sailing seemed almost assured.

But not so fast: Chaplik’s election bill was recently vetoed by Governor Ducey, ensuring its quick death in a legislature that is nearly evenly split. On the same day as the veto, Ducey signed two election bills, dealing an extra blow to Chaplik.

The bill would have required that county recorders cancel the voting registration of individuals if they received information that said voter did not have the right to vote, because they are not here legally, moved out of the county, or for any other reason that would make them ineligible to vote there.

The first question that a reasonable person would ask would be, what’s stopping someone from lying? From trumping up purported evidence that someone can’t vote and using it as an attack? It would seem that reliable safeguards to prevent this from happening weren’t considered, and as such Ducey likely saved the state from having to defend (and likely lose) a lawsuit.

Unfortunately, it feels like Chaplik is often more interested in making waves and getting attention than he is legislating. He has made headlines for some unfortunate reasons, such as questioning why masks weren’t used to prevent AIDS, or carrying the mantle on some conversative issues taken to extremes, such as refusing to sign onto school budgets unless they.bring with them anti-mandate mask mandates.

Chaplik will likely head to re-election, and we hope that this smackdown from Ducey gives him some pause and perspective. It would be ideal if he grows into this role and learns some lessons. After all, Scottsdale deserves leaders, not bombast. Tweeting is easy, but leadership is difficult, and we hope that Chaplik starts to learn the difference between the two.