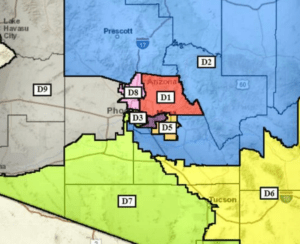 In the constant flurry of candidates attempting to grab your attention at the statewide level this year, it’s easy to forget that this year was the implementation of the redrawing of legislative and Congressional districts, as happens every decade after the census. With that comes entirely new maps for those races, and depending on where you live, the specter of being introduced to and having to research candidates (or even elected officials) that you’ve never heard of before.

When it comes to many of our Scottsdale and Paradise Valley readers, the only change was the number of the district. Many of you had David Schweikert as your Congressman in the old Congressional District 6. Well, congratulations, you’re now in Congressional District 1. However, nearly nothing has changed, as the boundaries look quite similar. And the story is not a particularly new one: Schweikert seems vulnerable, and people are lining up to pull the seat out from under him.

So how are things lining up for this race?

First. Let’s take a look at the Republican side. Obviously, Congressman Schweikert is running for re-election, but his position has long been perilous. Campaign finance violations have long hung over his head, although it seems as though he now has some clarity by agreeing to a $125,000 settlement with the FEC. He has never been a prolific fundraiser however, and has never really seemed to find significant protection within the Republican caucus, the sort of protection that is often afforded incumbents. As of the Q1 campaign finance report, he has raised over $1 million for this cycle with $439K cash on hand (CoH). What would be strong numbers for a potential usurper are weak numbers for a long-time Congressional incumbent.

Likely smelling blood in the water, he has a few Republican challengers this time around. Barely warranting mention, Josh Barnett is technically in this race; he recently ran against Ruben Gallego in his south Phoenix district, and seems to have confused bombast and a significant Twitter following with viability; his $3,400 CoH tell a very different story, a story of someone needy for attention.

Elijah Norton is an entirely different story though. A founder of a car insurance company, he is young and looks the part of a dynamic young politician with the funding to see it through: he has loaned his campaign $2.85 million as per the Q1 report. As with most loans, he likely will attempt to spend as little as he needs to to get those funds back, but also has raised an additional $670K from outside donors. That said, some are questioning his methods and practices from his company, and a Super PAC is calling him out as a “robocall king” and a scam artist. How much of the campaign is smoke and mirrors? The Q2 report and pre-primary report will tell us a lot about how much Norton actually will spend in his quest, but he does seem to give off the strong air of legitimacy and a true problem for Schweikert. Schweikert, however, will not be going quietly into the night, and is erecting signs notifying the public of Norton’s drunk-driving arrest from 2018.

Now to the Democratic side, and there are two challengers. Jevin Hodge is a longtime Dem party apparatchnik who recently ran for the County Board of Supervisors in 2020. He is known for having ingratiated himself as much as possible to DC interests, and his fundraising of north of $715K (and CoH north of $270K) demonstrate a degree of success there. His attempted past as a motivational speaker as someone in their early 20’s and resume bolstering as a head of a non-profit are not the makings of a legitimate, serious person however, not for a district full of true professionals and accomplished individuals. He has an honorary degree at Fake It Til You Make It University, and will likely win public office at some point if he keeps trying (see also: Rodney Glassman), but it’s tough to see this being that instance.

Dem challenger Adam Metzendorf provides an interesting alternative. As a Director of Membership Experience for the Phoenix Suns, Mercury, and the Arizona Rattlers, he clearly has made some interesting connections outside of the political arena. But the campaign finance reports don’t reflect that, and unfortunately Hodge likely has enough money to squash him in the primary.

In a Republican leaning district in a Republican leaning year however, it won’t matter. The only question is if Norton can unseat a relatively unpopular incumbent. Few people would say that David Schweikert is a great politician, but he can be quietly effective, and supplanting incumbency is not easy. Norton may need to spend most of his campaign loans to get this done. The Q2 reports coming out soon will give us plenty of insight to that end.