Today, Hall of Fame funny man Will Ferrell is creatively making his way around the Cactus League to showcase a great cause.
That he is here at all, able to move so conveniently from one stadium to another, reminds us all of one of the Valley’s most notable achievements.
The economic impact from spring training is staggering.  Just ask most any local business.  It’s like spring break, bachelor parties and Cooperstown all rolled into one. 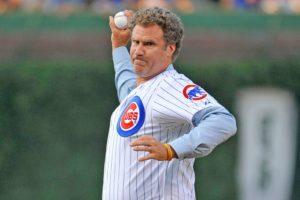 But that wasn’t always the case.
Some two decades ago Florida’s Grapefruit League was the favored place for the annual birthing of baseball.
But then Scottsdale City Councilman Jim Bruner stepped in, solidifying plans and funding to stop the Cactus League’s bleeding and the migration of more teams east.
Fast forward to November, 2000 when the Bidwill family, now capably led by Michael Bidwill, prevailed in a countywide vote that also included substantial new funds for Valley spring training stadiums.  The inclusion of such funds in a football focused tax was self-serving.  But so what?
We should be grateful to the Bidwills not only for a winning football team of late, or when a Super Bowl is in town, but each spring, for the Cactus League we have today.
And that brings us to former Mesa Mayor Scott Smith.  Despite the good work of the Bruners and Bidwills Arizona’s spring training superstar, the Cubs, were threatening to leave just a few years ago.
Mayor Smith figured out how to not only responsibly fund a new stadium for the Cubs, but he convinced the Oakland A’s to relocate to their old stadium too.  And that, by the way, led to Arizona State University moving into the A’s previous home at Phoenix Municipal Stadium, a significant upgrade for the program.
Life is about dominoes and sliding doors.  And such is and was the case of how we got to the Carnival known as the Cactus League.
There is no better place to be in America this month.  So next time you see Bruner, Bidwill or Smith, among others, give them a tip of the cap for taking the Valley out to a very big economic ballgame every March.