In 2007 a relative unknown named Michael Nowakowski decided to take on Congressman Pastor’s influence for the race to replace former Phoenix City Councilman Doug Lingner.
Undoubtedly an intriguing candidate, few gave Nowakowski a chance against Laura Pastor, the Congressman’s daughter.
He fared OK in the first round of voting, but finished well behind Pastor. Surely there wasn’t enough in the runoff election to make up that much ground. But he did. And his campaign manager for the upset? Ruben Gallego. 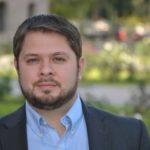 That should have told us something. Because its engineering was one of the more impressive Arizona political upsets in recent memory.
Gallego has since gone on to capture a seat in the Arizona House of Representatives, and assisted his wife Kate’s successful run against a Phoenix legend, First Institutional Baptist Church Pastor Warren Stewart.
And last Tuesday he sleighed a Democratic legend (at least in her own mind), the ethically short cutting Mary Rose Wilcox.
By any stretch this is one of the more accomplished and meteoric rises, ever, in Arizona politics.

But as historic as the successes are, the innovative way in which Gallego has gone about his business may be even more impressive.
Without his next generation get out the vote efforts there would be no Tempe Mayor Mark Mitchell and other electeds who owe their success to that which helped make his.
John McCain will be remembered for his personal story. Joe Arpaio for being a 21st Century Wyatt Earp. And Janet Napolitano for a keen mind respected by all.
Gallego’s path, born of a time in the military and learned through book and street smarts, is uniquely his.
It is yet unclear whether a superb tactician can grow into a transcendent statesman. But that we are even having such a discussion about someone not known 7 years ago and all but 34 years old today is one of the most remarkable stories in Arizona today.