PARADISE VALLEY, Ariz.) He made history as Paradise Valley’s first directly elected mayor. He served the community for 25 years. As Mayor and as a member of the Town Council, Scott LeMarr navigated Paradise Valley through good times and challenging times. His leadership helped the community emerge from the recession without massive debt. Now, with Mayor LeMarr not seeking reelection he is endorsing Vice Mayor Michael Collins for the Mayor’s post in the upcoming August 26th primary election, which is an all mail-in ballot. 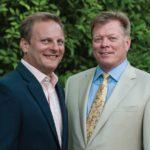 Mayor LeMarr made the endorsement May 7th during the formal launch of Collins’ campaign. Mayor LeMarr states, “I was proud to introduce and endorse Michael Collins as he begins his campaign. There are still a number of important goals to accomplish before my term ends in January. My work is far from over. I want to make sure our next mayor will continue that work. I believe that person should be Michael Collins. It’s my hope that Michael Collins pushes back on needless density grabs by developers to preserve that which makes Paradise Valley unique. Michael is a consensus builder who understands the delicate balance of neighborhood preservation, building a strong local economy, and fiscal responsibility. He is committed to keeping Paradise Valley as Arizona’s finest community.”
Vice Mayor Michael Collins said, “Mayor LeMarr has led and continues to lead Paradise Valley in the right direction. The quality of life is high, the crime rate is low, and our resort-driven economy is charging ahead. I look forward to continuing the work by Mayor LeMarr and those on the Town Council. I hope voters will give me that opportunity.”
Mayor LeMarr’s endorsement makes it unanimous. Collins already has the endorsement of every current member of the Paradise Valley Town Council as well as former longtime Councilmember Pam Kirby.
Collins is currently the Vice Mayor of Paradise Valley. Collins added, “I have learned a great deal from Mayor LeMarr. We need to build on the gains made these past few years.”
Michael Collins was first elected to the Paradise Valley Town Council in 2010. During his time on the Council, he served as Chairman of the Public Safety Task Force which has helped to reduce the local crime rate, along with Paradise Valley’s great police force. He served as Chairman of the General Plan Advisory Committee which oversaw a general plan that received 80% voter approval. Collins was part of a team that championed a redevelopment plan for the decrepit Mountain Shadows resort.
Collins has also served on the Paradise Valley Planning Commission from 2007 to 2010. He is a former President of the Camelback Country Club Estates Association of Homeowners. Collins is also a veteran of the United States Navy. He and his wife Jennifer are proud to be raising three school-age children in Paradise Valley. Michael Collins currently owns and runs a successful business with 45 employees in seven states.