We don’t bemoan any working boy in the public affairs world.  But when an outlet proves to be as open to conversion as the Sonoran Alliance has of late on energy policy it is a bit conspicuous, if not obviously a case of promiscuous politics.
You see, it was once upon a time that Sonoran Alliance talked of “crony capitalism” not as a critique of solar companies but that Arizona utilities were abusing their monopoly status to squelch competition from these emerging tech companies.  The blog wrote about utilities then, much as its contributors do about Uber, or as Ted Cruz might describe the nation’s capital:  a cartel in need of some challenge.  After all, solar companies don’t enjoy nearly the subsidies utilities do, most especially the biggest subsidy of all: monopoly status.  We could opine further but there’s really no need as there is really only one dynamic in this debate to highlight the blog’s hypocrisy:  money. Taxi drivers and utilities occupy the same intellectual property yet one has sufficient money to interrupt traditional behavior, and one does not. 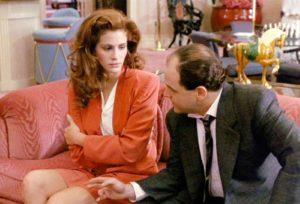 So when the Sonoran Alliance starts paying attention to Arizona Corporation Commission hearings in Lake Havasu City and criticizing ratepayers there revolting against the Canadian utility monopoly’s plans to lighten everyone’s wallets (Here is a link) we thinks it’s not too hard to imagine what’s going on.
To further enforce our point it would be easy to make reference to a movie, say something like Pretty Woman.  But that would be too easy, like Julia Roberts’ character was. After all, she ended up being likable and informative, like Sonoran Alliance has been until late.  In fact, Vivian Ward was particularly insightful about Philip Stuckey. Readers will recall him as Richard Gere’s sidekick who was overbearing, ruthless and obnoxious.  Come to think of it that sounds a lot like Arizona’s utilities today.  Just as they found a way to fend off Arizona Republicans once upon a time like Brenda Burns, Bob Burns and even Gary Pierce who wanted to introduce more choice into Arizona electricity markets, they are now attempting a 1-2 punch with “demand charges” and solar tariffs to again knock out any semblance of competition.
The reason Arizona Corporation Commissioners felt the wrath in Lake Havasu City, as they did the week prior in Nogales, wasn’t because of solar political operatives (who are apparently far more effective than their utility counterparts).  It was because groups like AARP and common sense from the common folks understand what’s taking place.  The only question now, since Sonoran Alliance has seemingly used its free agency status so, shall we say, entrepreneurially, is whether Doug Little, Tom Forese, Andy Tobin and Bob Burns will hold the line, any line, or do their best Philip Stuckey impression?