PHOENIX (August 8, 2018) – A new poll reveals that support for an increase in the individual income tax collapses when voters are informed of the actual percentage increase being proposed, raising major doubts over whether proponents would have collected sufficient signatures had they leveled with petition signers. [POLLING SUMMARY.]
The tax hike initiative proposes establishing new income tax rates of 8 percent or 9 percent depending on a taxpayer’s income, an increase on the current 4.54 percent top individual rate, resulting in tax rate increases of 76.21 percentand a whopping 98.24 percent.
Initiative proponents, however, lowballed voters on their petition, claiming their plan would result in tax rate increases of only 3.46 percent or 4.46 percent. 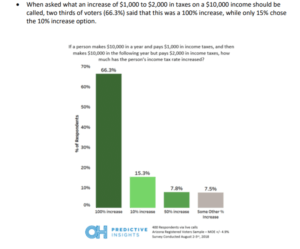 “When Arizona voters get the real story, support for a major increase in the individual income tax completely falls apart,” Arizonans for Great Schools and a Strong Economy Chairman Jaime Molera said. “No wonder the proponents didn’t shoot straight with voters: they wouldn’t have gotten the signatures.”
Nearly sixty percent of respondents to the live-caller poll of 400 registered voters, which was conducted August 2-3, said they would support a 3 percent income tax increase on individuals earning more than $250,000 annually.
But respondents overwhelmingly rejected a 76 percent income tax rate increase on that same income bracket. Less than 30 percent of respondents said they would support such a dramatic tax rate increase. Support was just as weak for the 98 percent tax rate increase.
Respondents also made clear that they understand just how dramatic an increase the proponents are seeking when responding to the following multiple-choice question:
If a person makes $10,000 in a year and pays $1,000 in income taxes, and then makes $10,000 in the following year but pays $2,000 in income taxes, how much has the person’s income tax rate increased?
1 – Ten percent increase
2 – Fifty percent increase
3 – One-hundred percent increase
4 – Some other percentage increase not listed
Over sixty-six percent responded correctly that the example represents a 100 percent tax increase.
“Arizona voters can do the math,” Molera said. “And when they do, it becomes clear that proponents are attempting to wildly mislead them.”
Molera is a plaintiff in a lawsuit that argues the flaws of the petition that was circulated by the initiative proponents are so severe that the proposition should not appear on the November ballot.
“I am confident that the judicial system will find the proponents’ work sloppy and misleading and will remove the initiative from the ballot,” Molera said. “But, if for some reason we must continue this campaign through the fall, this poll confirms that public opinion is on our side and that a near doubling of the income tax rate will be rejected by voters.”
# # #
Paid for by Arizonans for Great Schools and a Strong Economy, sponsored by the Arizona Chamber of Commerce & Industry. Not authorized by any candidate.