One of those is honored at Tatum & Lincoln.  There proudly and rightfully stands a statue of former U.S. Senator and 1964 Republican Presidential nominee Barry Goldwater.  The Town of Paradise Valley’s wise decision to transform a challenging one-acre parcel at its busiest intersection into Goldwater Park will stand for all time as among its wisest decisions.
But why stop at Goldwater, especially when the town boasts alumni worthy of similar recognition?
We suggest two more, Sandra Day O’Connor and William Rehnquist. 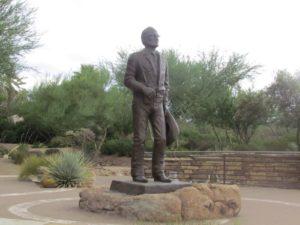 O’Connor as most know was the first female U.S. Supreme Court Justice.  Her and her husband were proud Paradise Valley residents, active around town and there when Goldwater Park was dedicated.
The former Chief Justice of the United States Supreme Court, Rehnquist’s ties to Paradise Valley run deep too.  He served as Paradise Valley’s town attorney when the community first incorporated.
With town finances in such good shape we can think of few greater ways to enhance Paradise Valley’s public art.  Locations could include the Mountain Shadows “park” on the southeast corner of 56th Street and Lincoln.  Or Town Hall.  Or the Town’s relatively new court complex.  Perhaps there are other appropriate locations too.
But the primary notion in a community that honors its views and recognizes the significance of its resorts is to honor two more people who enhanced all that is Paradise Valley.