We have not been fans to date of an overly aggressive development plan for a Ritz-Carlton resort and community in Paradise Valley. But even we can admit that the story of last week should have been the signs (finally) that the developer is at least starting to get it by dropping the second “H” in its HGH plan for the Scottsdale Road and Indian Bend Road site.
However, thanks to conduct unbecoming by the Paradise Valley Town Council the story of last week is now its derelict decorum not a plan that is improving but still needs fine tuning.
Let’s refresh. 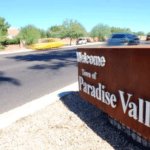 Most would agree that having a Ritz-Carlton in Paradise Valley would be a good thing.  Voters thought as much in 2008 when they approved of what was then an aggressive entitlement by a wide-margin.
Most would also agree that some of what has been proposed by Five Star Development in 2015 to advance a Ritz on the site is inappropriate.
But that doesn’t mean that the councilors of Arizona’s most enviable town should employ a  smugness, even rudeness,  to those wanting to invest some $250 million into the community.
The Town Council’s first formal review of plans of the latest Ritz plan’s last Thursday was an exercise not in polite rebuke but over the top commentary, save for the tethered toastmastering of Councilmembers Syms and Stanton.
The night was best exemplified by the atypical performance of Councilmember David Sherf, he of usual sobriety on key policy matters.  Instead, he seemed inebriated on a newfound affinity for soundbites, even referring to the Ritz plan as “ludicrous.”
While we may share some of the concerns expressed by Sherf things “ludicrous” last Thursday were ultimately trumped by commentary emanating from his typically sagacious voice toward plan proponents that are seeking an investment that could alleviate the town’s numerous financial burdens.  To date, the town (including Sherf) has taken the easy route, renewing tax increases and finding no solution to increasing public safety pension costs.  A new Ritz-Carlton, in a better form, would alleviate such burdens.  We’re Sherf of that.  Is he?
We will never find fault with those seeking to protect the uniqueness of Paradise Valley.  But it doesn’t need to be done in such a way that reflects so poorly on other community attributes:  decency and decorum.
Now that the discussion about a new Ritz-Carlton is fully engaged it’s time for both parties to dispense with approaches unbecoming.  Because a good plan and compromise is achievable. Interestingly enough the parties may look to Montelucia for further guidance. Once criticized, the resort property at Tatum & Lincoln is now highly-regarded by the citizenry and annually hosts small little companies like Google for conferences. But more on that in the months to come . .  .