The city is a land of great things.  Hikes. Preserves.  Arts.  Imaginative waterways. People.  Nightclubs.  Restaurants.  Spring training.  Special events.  And golf.
Golf is a driver of tourism, the city’s most important industry.  The sport’s economic impact is staggering.  But most tourists can’t play the plethora of private links at Desert Mountain, Desert Highlands, Whisper Rock and Estancia, among others. 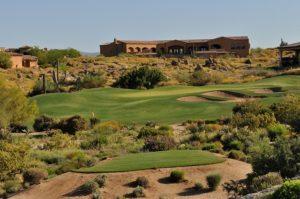 It’s the other courses, the public ones, which play the unquestioned, unrivaled and accessible role for tourists.
And first among Scottsdale’s public course equals is Troon North.  Its two 18-hole courses are holes in ones for Scottsdale coffers.  Indeed, Troon North has been recognized by the Golf Channel, Golf Digest, Travel+Leisure and Conde Nast media not just as the best public course in Arizona, but among the best in the United States.
Simply put, Troon North is a Scottsdale point of pride, a tourism trophy that doubles as a gathering spot for the 1800 homeowners that make up the community.
So while residents are used to twosomes and foursomes imagine the shock when a group of  developers showed up to triple the density of a timeshare plan on a beautiful plot of land at the entrance to Troon North, adjacent to the landmark clubhouse.  That would be like seeing Cindy Crawford with acne.
Yet, City of Scottsdale planning staff doesn’t seem to want to play the role of Clearasil.  They are supporting the Floridians call to triple the timeshares at Troon North, forsaking the common sense count from the property’s original count in the low 20s for a Boca Raton like bounty in the 60s.
When they introduced their plan earlier this year the Floridians were ridiculed at a public meeting with some 200 residents in attendance. One would think outsiders would respect such opinion in order to ingratiate.  But not these Palm Beach Paulies.  Instead, they sought to trample the testimony and hired City of Scottsdale Planning Department alumni Don Hadder.
Somehow, miraculously, Hadder seems to be on the verge of convincing planning staff that, despite overwhelming opposition from the Troon North HOA, Scottsdale would be better served by porking the pockets of the proposer than respecting the provenance of the property and the people.
Perhaps if the planners won’t listen the politicians, such as Mayor Jim Lane, will.  Or perhaps Scottsdale’s new City Manager, Jim Thompson will take notice. Troon North is about to make a lot of noise, and rightfully so, because Troon North needs protection not protagonists.  The Rusty Spur doesn’t need a disco ball.  The Coach House a new veneer.  Nor Scottsdale Stadium a contemporary look.
Some things Scottsdale has created need no improvement.  They simply deserve respect.  Troon North is such a place, already a birdie, trying to avoid a bogey, not necessitating help now or again to be great.