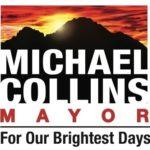 (PARADISE VALLEY, Ariz.) Paradise Valley Vice Mayor and local businessman Michael Collins is announcing his candidacy for Mayor.
Collins was first elected to the Paradise Valley Town Council in 2010.
During his time on the council, Collins chaired the Public Safety Task Force which has revolutionized the Police Department and improved public safety. He also served as Chairman of the General Plan Advisory Committee which updated the Town’s General Plan and received 80% voter approval. Collins was a champion for efforts to solve Mountain Shadows redevelopment concerns, an achievement that is resulting in the renewal of this historic resort property. 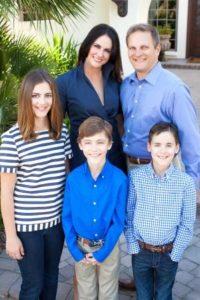 “Mayor LeMarr has done many great things for Paradise Valley and I hope to build upon those accomplishments. We are headed in the right direction and I want to keep us there and protect that which makes us special,” said Collins.
In order to make that happen Collins is committed to maintaining low density, keeping public safety a top priority for the Council, keeping taxes low, ensuring limited government, preserving open space and mountain views, and maintaining and cultivating a vibrant resort industry which will prevent the need for a local property tax.
Collins added, “Together, let’s keep our densities, crime and taxes low but our quality of life very high.”
In addition to his service on the Paradise Valley Town Council, Collins served on the Paradise Valley Planning Commission from 2007 to 2010. He is a former President of the Camelback Country Club Estates Association of Homeowners. Collins is also a veteran of the United States Navy.
Collins is a strong advocate for civic duty and resident engagement in local government and improving the flow of information between town government and residents. “Our town has such a wonderful wealth of knowledge, skills and resources that as Mayor I would be committed to improving the way our town government communicates and interacts with residents and increasing opportunities for resident involvement in the process and procedure of local government,” Collins said.
Michael Collins currently owns and runs a successful business with 45 employees in seven states. The business is dedicated to improving the way land use, construction, engineering and environmental consulting services are provided to the military.
For more information log on to www.collins2014.com
Paid for by Paradise Valley Neighbors For Michael Collins