Excuse us if we borrow and take license with the “nattering nabobs of negativism” phrase patented by Vice President Spiro Agnew in his critique of media.
We invoke a related phrase now because the recent missive from the “Desert Edge Advocates” in their “Views” eblast earlier this week demands it. 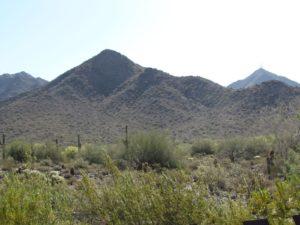 To a small extent we feel sorry for the group.  After all, what is one supposed to say after opponents of their ridiculous project in the McDowell Sonoran Preserve just submitted a stunning 37,000 signatures to put their project to a public vote?  We all know how that’s going to go.
Still, let’s dissect some of the recent tripe.  It’s sophomoric and insulting.
ONE OF THEIR STATEMENTS:  “Where were you in 1993 when the first steps were being taken to create the McDowell Sonoran Preserve?  There’s a good chance it wasn’t in Scottsdale, because many people who live here now were living somewhere else 25 years ago.”
TRANSLATION:  The opponents are not as native as project backers therefore they should be discredited.  Baloney.  Nearly 40,000 Scottsdale residents just signed a petition and they want to insult the strongest grassroots statement in city history?  Ridiculous.
ANOTHER STATEMENT:  “For those who participated in the process or were around during that period, they know the McDowell Sonoran Preserve and Desert Discovery Center concepts are almost inseparable.  The very first Desert Discovery Center actually preceded the establishment of the Mountain Preserve when Florence Nelson took the initiative to create a modest DDC at Pinnacle Peak and Pima Roads in the late 1980s.”

TRANSLATION:  The DDC was and is the McDowell Sonoran Preserve.  Seriously?  Who writes this stuff?  Show us one campaign advertisement that emphasized the project during the authorizing votes and we’ll recant this particular criticism.  If backers want to now go build a “modest” DDC outside the Preserve or with their own money, have at it.

ANOTHER STATEMENT:  “Both concepts began as a dream.  They quickly turned into a vision thanks to leaders like Mayor Herb Drinkwater . . . “

TRANSLATION:  Genuflect because we just invoked the name of the most beloved public servant in Scottsdale history, Mayor Drinkwater. Look, no one deserves statues and kudos more than the great man he was but to state his effective endorsement now, not knowing what his opinion would be, is sad and desperate.

ANOTHER STATEMENT:  “Unfortunately, a few of the loudest voices, who have only recently become involved in the issues surrounding  the McDowell Sonoran Preserve because of their own self interests have seized control of the community discussion.  They have politicized the public process that, until their involvement, had been rational, respectful and inclusive.”

TRANSLATION: We blew it.  Our defense of the project has been so bad that we now need to find scapegoats in the form of . . . .  citizens exercising their constitutional rights via the initiative process to create more rights for citizens, a public vote!  Oh, hear their nattering nuance of negative newbies here again.  Do they want Scottsdale to be autarkic?  These voices are usually the ones espousing pro-business, growth-oriented policies that have the very effect of bringing in the new people they now criticize?

Spiro Agnew is likely rolling around in his grave listening to this nonsense.  Then again he can probably hear it so clearly because both Agnew, and the Desert Discovery Center, are six feet under.