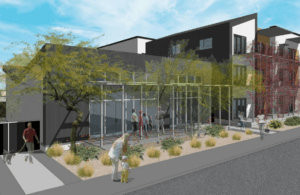 Another day passes, and another story hits the wire about development elsewhere in the Valley, a story of Scottsdale developers unable to build in their own city and focusing their efforts elsewhere. In this case it’s in Mesa again, with a 144-unit mixed use development near downtown.

We have spoken at length about the housing crisis in this state and Scottsdale’s refusal to acknowledge or rectify the problem. We must give kudos to Mesa for their embrace of more housing options as a way to help drive down rent costs. Cities across the value are feeling the heat as rent costs have increased dramatically throughout the state, but Scottsdale leadership doesn’t seem to care.

However, the increases in rent are unsustainable. Long term renters are getting priced out of their current places, and folks across the Valley are having trouble finding affordable housing. One of the selling points of Arizona used to be its relative affordability. Now that that has gone, what does AZ offer to bring in new residents from across the country?

Scottsdale should be concerned about what comes of this, as now state legislators are starting to address the problem. A new bipartisan bill going through the legislature will allow developers to bypass zoning changes that currently generally need to be approved by city councils; simply put, it would take away the ability of cities and towns to zone. As the problem persists, legislators will feel the push to do something about this problem, so this may just be the beginning of draconian bills designed to alleviate the issue.

We wish it didn’t have to come to this. We wish city councils would be reasonable and simply ignore the loudest of NIMBY voices. However, they seem unwilling to do so, instead choosing to nit-pick and reject anything that doesn’t stringently follow their strict rules and vault over their high bar. We can’t support this legislation, but we can’t support blanket rejections of reasonable developments either.

When projects such as 92 Ironwood, where a decrepit empty office complex would be replaced with an apartment complex with widespread appeal, have such difficult pathways to fruition it paves the way for such draconian and dangerous legislation. This is what spurs overreach from the legislature. The short-sightedness is shocking, but now the potential penalties are becoming plain to see. The Scottsdale City Council would be well served to avoid that train wreck of government overreach and make more reasonable decisions. They deserve some blame in perpetuating the current problem, but they also have the ability to fix it.