Many times we side with neighbors fighting the good and necessary fight against developer overreach.
But as we have opined already the bizarre activism by some neighbors against an enrichment of the Cactus Corridor defies common sense.  But we do appreciate their reminding us of pop culture.
For across the street of one of the nicest equestrian ranches ever proposed in Scottsdale along Cactus just west of Scottsdale Road is this interesting abode.  It best resembles the set of Sanford & Son. 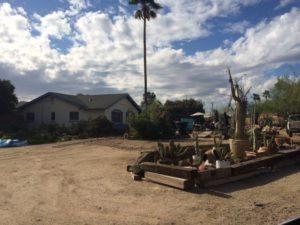 See it for yourself.  That any neighborhood wouldn’t want the promise and pending platitudes of  Rancho Paraiso (we won’t refer to it as neighbors do as “Najafi Ranch” which is a not so subtle slur of the proponent’s Iranian heritage) to if nothing else distract from this community
zit is stunning.
And by all appearances the westerly way of Scottsdale’s Cactus Corridor needs reinvestment as Rancho Paraiso promises.  The area has become a rude stepchild to the adults of the eastern Cactus Corridor.  There horse country is beautiful and obvious.  There one property four times the size of Rancho Paraiso anchors the area.  Sandspur Ranch is their Wrigley Manson.
But a few irascible neighbors want to run it away.  Bizarre, because within their midst – only one block from t 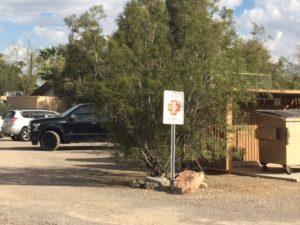 he site – is the Liberty Wildlife Rehabilitation Center.
It’s there that indigenous birds, raptors and wildlife are repaired and sent back to their worlds.  The operation’s noble work is why they are supporting the rehabilitation and recreation proposed at Rancho Paraiso.  For horses.  It’s odd that a neighborhood of horse properties would discriminate against equine, yet apparently have no problem with Liberty Wildlife.
Then again, perhaps they are more comfortable with shrieks and sounds emanating from wildlife refuge.  Because that’s what they will get in the form of hundreds of kids at a new charter school on the six acres in question, if the refined ranch called is turned away April 5th.