By Scottsdale Pinetop
As the Scottsdale city election draws near, it is now more important than ever to get to know the candidates looking to lead the city. Scottsdale long had a reputation of being a tourist destination and entertainment hub, but it’s also a city beloved by its residents. To ensure that Scottsdale stays that way, it needs a dedicated council committed to its residents, 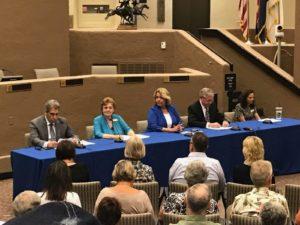 businesses and integrity while also having a vision for the future.
Last Monday, the Scottsdale Independent hosted the 2018 Scottsdale City Council debate where candidates deliberated an array of issues. The five candidates pursuing the three seats are incumbents Linda Milhaven, Kathy Littlefield and David Smith, seasoned candidate Bill Crawford and newcomer Solange Whitehead. Each candidate expressed their opinions and expectations for the city – some opinions stronger than others.
At the heart of the 2018 Scottsdale elections is the debate over the potential development of a Desert Discovery Center on the McDowell Sonoran Preserve. After months of work and community support, the Protect Our Preserve petition garnered a total of 37,608 signatures qualifying it for the ballot as Proposition 420. If approved, Proposition 420 would revise the Scottsdale city charter to state that all construction and usage of earmarked conservation dollars within the McDowell Sonoran Preserve would require a public vote.

Kathy Littlefield and Solange Whitehead have not been shy to share their support for Proposition 420. They expressed their support early on in the campaign and have been vocal advocates to ensure that measure passes this November. During the forum, Bill Crawford re-announced his support for Proposition 420, despite what some have said.
In opposition, Milhaven stated that she cannot support the measure believing the existing ordinance is clear enough and already establishes protection of the preserve from commercial developments. Despite the hard criticism from the Protect Our Preserve community, she’s remained firm on her stance and vision for the Preserve. As for David Smith, he still refused to give a straight answer on the issue. He continues to “toe the political line” on the issue hoping not to offend parties on either side.
The other ballot measure facing Scottsdale voters will be an increase in local sales tax by .10 percent for 10 years in hopes of raising more than $10 million to help pay for the city’s transportation needs. All five candidates support the measure, though their rationale and opinions differ. All agree that the city is in dire needs of the funds to help address some of its infrastructure and transportation needs, however, it is not an overall solution to the 118 identified infrastructure projects.
To learn more about the debate and candidate positions, click here to read the Scottsdale Independent’s recap of the forum.
Scottsdale offers an abundancy of amenities from vibrant outdoor activities to a thriving downtown and Waterfront. This is part of what makes Scottsdale unique. This is because its residents and past councils have invested in its future and preserved its unique qualities. We benefit today because of their hard work and vision for the future. At the end of the day, it’s up to the Scottsdale voters to decide who they want to represent them. So who will it be?