The embattled Bob Littlefield has many problems as he seeks to become Scottsdale’s Mayor at the same time his wife is serving as Vice Mayor.  Bad polling numbers.  Mayor Lane’s adoption of a “Two Littlefields Are Too Much” message which is devastatingly simple for voters to understand.  Etcetera doesn’t do justice to the enumeration that could take place on what plagues Bobastic.
Yet, two examples and two people underscore Littlefield’s ills quite well.  That’s because campaigns are about addition.  But to look at the Screamer of Scottsdale is to see only subtraction.  Indeed, Susie Wheeler is a top Scottsdale equestrian and has long been a Littlefield supporter. But not this time.  She’s endorsed Mayor Lane because of his commitment to the community’s ranch culture while Littlefield wants it to gallop out of town. 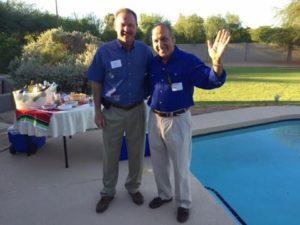 Then there’s George Zraket.  He was Bob Littlefield on the Scottsdale City Council before Bob.  Indeed, as anti-business as Littlefield is – even wanting to shut down small businesses in Scottsdale’s downtown – Zraket makes one of the two Littlefields look like Richard Branson.  Yet, according to Lane’s social media, he showed up at the Mayor’s house this weekend to support him.  That’s remarkable.  Despite a similar political philosophy Zraket has such disregard for Littlefield he opted for the pro-business Lane.  Maybe Zraket was inspired by seeing the most popular musical in the land that regales Alexander Hamilton’s decision to endorse Thomas Jefferson over Aaron Burr.  He did so because while disagreeing with Jefferson he realized he had principles where Burr purportedly had none.   Like Littlefield.  (By the way, a tip of the cap here to Scottsdale businessman and former Mayoral candidate Bill Crawford for introducing “Hamilton” vernacular into this year’s mayoral race dialogue).
Credit goes to Scottsdale and some unlikely citizens for realizing this.  It’s one thing for Grumpy to be one of the Seven Dwarfs, or one of seven members of the City Council.  It’s quite another to have him as one of one, the Mayor of a great city like Scottsdale.