He Chuckled Like Jabba The Hut Before He Killed Citizen Rights
Avid Star Wars fans will remember Jabba The Hutt’s laughter at the beginning of Return of the Jedi.
That’s the way many probably feel after reading former Scottsdale City Councilman, defeated State Legislative candidate and current Scottsdale Mayoral candidate Bob Littlefield’s recent tome.
After resembling Grumpy during the early days of his quixotic quest to join his wife on the Scottsdale City Council, Littlefield proffers a sunnier disposition outlining some of the things that are good about Scottsdale before assigning responsibility alone to residents – not businesses – who helped make them happen. 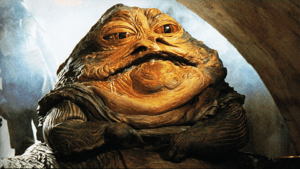 President Obama is in Cuba this week.  Littlefield’s reasoning reminds us a bit of Che Guevara. Or Bernie Sanders, who was in Phoenix this week.  People good.  Business bad.  It sounds more like Sweden than Scottsdale.
But we return to Jabba.  His laughter soon gave way to demise as he was choked to death by Princess Leia seeking to escape his grip.
The scene is apt to describe Littlefield’s disqualifying hypocrisy on so many matters because no one in recent Scottsdale history has choked out citizen rights more than Bob Littlefield.
How?
Because back when the Scottsdale Waterfront was but an idea – and didn’t include the two tallest residential buildings in the city – Bob Littlefield not only voted for them he did so with an “emergency clause.”  What’s that mean?  He viewed the project’s density so important – akin to a fire or flood – that he took away the rights of the many opponents at the time to challenge their government via a referendum.  The project almost certainly would have gone to the Scottsdale ballot and lost.  But Brother Bob never gave those residents respect or rights.