Near the end of The Last Crusade,  Indiana Jones stood on the side of an abyss, not knowing how he was going to get to the other side.  He necessarily relied on the higher power above and Jones’ leap of faith was rewarded.
The other side, the “No” side, in Scottsdale’s Proposition 420 debate, that being the one to rightfully require public votes on major impacts in the McDowell Sonoran Preserve, is asking voters to take a leap of faith of a different kind.  All to build an unnecessary, taxpayer sucking project called the Desert Discovery Center, Proposition 420 opponents are engaged in the most hollow and disingenuous campaign in city history.  Today we wish to focus on yet another example.  Those are the claims that if Proposition 420 passes a cabal of unelected citizens will effectively be dictators of what happens in the Preserve forevermore. 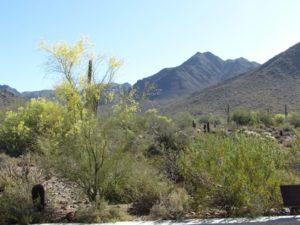 Let us tell you why this is nonsense and then undermine their argument further, even if it was untrue.
Proposition 420 was very clearly written. We encourage all to read the actual language by going to the City of Scottsdale website. Here is a direct link.   In it Section 12 outlines prohibitions on altering the natural state of the Preserve for things such as the Dumb & Dumber Center (DDC) .  Reasonable exceptions are then spelled out including:  “New trails approved by the McDowell Sonoran Preserve Commission.”  That’s certainly reasonable and should not be understood as eliminating the duly elected Scottsdale City Council from also approving such trails.  It just says the citizens appointed to the Commission must also do so, meaning the Council can’t upend a decision not supported by its lower court.
But let’s say our analysis and logic is wrong and Proposition 420 is the end of democracy as we know it in Scottsdale.  You mean like what happened in Arizona in 2000?   Then, Arizona voters decided to take congressional and legislative redistricting power away from elected officials and to an independent citizen’s commission.  Passed by a substantial margin,  the people not the politicians have done a pretty good job over the past two decades providing for more competitive districts and otherwise managing the process well.  And it’s not as if there are no checks and balances on that system, as would be the case in Scottsdale too.  Elected officials still pick the majority of those participating.
So if citizens can handle more weighty subjects like dozens of congressional and legislative districts in Arizona we thinks they might, just might, be able to handle new trails in the Preserve too that do not violate the spirit of Proposition 420.
In their desperation Proposition 420 opponents continue to look for their Holy Grail, knowing the substantial support that exists for the measure.  They need to keep looking because they continue to choose message and logic, poorly.