John McCain learned an invaluable crisis communication lesson during and after his Keating Five debacle. If you’re not part of the solution you are part of the problem. In other words, never be the status quo, especially when trouble hits.
It is an approach that has served McCain well. In a world of crisis communication “experts” he may be the best of all. 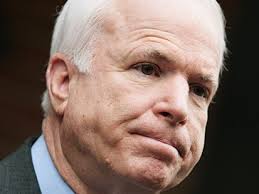 The question now is, does McCain himself have a crisis as it relates to the Veteran’s Administration malfeasance in Phoenix that is now a national scandal?
After all, how does a United States Senator serving Arizona since 1986 not know what is going on in such an important federal operation? Did his office never get a constituent complaint? If not that would seem terribly odd, considering the level of purported malfeasance. Wouldn’t the office of a veteran and longest serving elected official in Arizona be one of the first people to contact for help? Did McCain or someone in his office drop the ball, or did they not?
During the 2010 race for Arizona Attorney General Felecia Rotellini was criticized for failing to act on information before the Mortgage’s Limited corporate meltdown that hurt thousands of Arizona investors. It was a fair question for Rotellini. It’s an appropriate question now for McCain.
It’s also poor representation if McCain didn’t know about the problem. To some extent United States Senators are the Federal Territorial Governors for the states they represent. This speaks to an oft-heard criticism of the senior senator that he should spend more time on Yuma than the Ukraine, especially since his work horse, Jon Kyl, is no longer in the Senate minding the Arizona store for him.
We don’t question Senator McCain’s commitment to veterans by a long shot. But it is fair game to question him in this particular circumstance. With a re-election campaign looming he knows this could be an Achilles’ heel. And it’s better that a general’s head roll in 2014 rather than his in 2016.