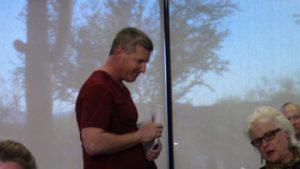 Their monkey wrench gang vitriol and antics are almost enough to get even us to reverse our opposition to the Desert Discovery Center.  Almost.
But what can’t be denied is how swiftly the “NO DDC” group’s political stock has fallen since November 8th.
They went all in for Bob Littlefield in his challenge to Scottsdale Mayor Jim Lane.  He got trounced.
The group sought the defeat of Councilmembers Suzanne Klapp and Virginia Korte.  They finished first and second in the voting.  Their chosen candidate, Guy Phillips, barely survived, narrowly beating back a challenge from Scottsdale newcomer Dan Schweiker.
Then it was revealed here how deficient NO DDC’s self-professed leader Jason Alexander truly is.
But the resonant revelations about the group’s increasing impotency can best be found in an analysis of Scottsdale’s November 8th precinct tallies.  As Lane, for example, ran up more than 70% of the vote in some areas of the city he won narrowly in the two precincts where the Desert Discovery Center was an obvious concern.  Littlefield actually bested Lane by some 20 votes in DC Ranch but lost by 200 in the WestWorld precinct.  This is where it gets interesting.  Lane clobbered Littlefield in all other northern Scottsdale precincts.  Desert Highlands, Grayhawk, Granite Mountain.  Littlefield discovered scant votes in those and other desert centers.
What’s that tell us?
Beyond these two, proximate areas of the city voters just don’t care about the Desert Discovery Center.  And that’s a problem for the project’s opponents moving forward.
Indeed, we can’t understand why congressional Democrats kept Nancy Pelosi around after so much failure.  And we don’t understand why the understandable opposition to this McDowell Sonoran Preserve imposition would cede itself to a gang that can’t shoot straight.  At a minimum they should get away from personal attacks and the belief they know how to operate like Axelrod or Carville.   The merits of the argument are, and should be sufficient.  It better be, because their standing as a political force looks more like a penny stock.