Zoning applicants and neighbors.  From Buckeye to Scottsdale they can get along swimmingly, or not much at all.
Such is the situation to date for a head-scratching case currently ongoing in north Phoenix.  There, near Tatum and Dynamite, is a self-storage proposal that by all accounts resembles what is probably the nicest one in the Valley, that near the Estancia Country Club near Pinnacle Peak in north Scottsdale.

Take a look at a recent letter the project, Your Next Closet, sent to the city. It’s copied at the end of this article.
So let’s understand this.  Some want a high-traffic, high-potential for problems, higher-density and just simply higher apartment project as allowed by current zoning, or a Goodwill( which has submitted a back-up offer)  rather than a docile, first-class storage facility with all the concessions and benefits described therein?!
Count us among those who just don’t get it.  But we do get how this is an absolutely classic case of how some fancy themselves activists and jump the gun as they jump out to the public with false information.  Guys like Wade Tinant.  Look here at this video he did.  Here is a link.  It appears to be just wrong.  We’ll have more distortions Wade likes to engage in another time.
There are inflection points in zoning cases and politics.  Those with integrity don’t just dig in and fail to acknowledge facts and changing circumstances as appears to be the case with “Your Next Closet.”  Compromise carries the day and neighbors are rewarded, as should be the case here.  Because, seriously, they would prefer a big used clothing store or yet another apartment complex over this proposal?
This should be an easy call for neighbors and Phoenix City Councilman Jim Waring.

Re: Your Next Closet: A New Standard in Self-Storage Proposed for the SWC of Tatum & Dynamite
Dear Acting Chair,
We have some updates and good news, as we have been hard at work on the details of our proposal for Your Next Closet.   We also want a chance to set the record straight.  As the business owner behind the proposed storage facility near the southwest corner of Tatum and Dynamite, I can tell you that there has been a tremendous amount of misinformation that is being circulated throughout the community.  Whether one ultimately supports or opposes Your Next Closet, a facility we think will be the finest ever built in the Valley, we would like everyone to at least have accurate information.  You and all residents should feel free to verify any of this information with City of Phoenix staff, Josh Bednarek at (602) 256-3555 or Kaelee Wilson at (602) 534-7696.
Very importantly, after going through the ten biggest myths being told about Your Next Closet we want to share some exceptionally positive news we think you and many others will find encouraging and beneficial! Indeed, some if not all of the progress is the result of the extensive input by citizens to make the project the best it can be. This is important because we much prefer the current application to building 2 to 3-story apartments as current zoning allows, a project like our company completed in North Dakota.  And we have become aware that Goodwill has a back-up offer on this site should this proposal not be approved.
Myth #1:  “Official vote on the storage unit at Tatum & Dynamite on 8/7. Ballots accepted anytime between 6 and 7 pm. You do NOT need to be a PHX resident to vote. Elected decision maker has said he will deny the application if we get 100 people to the vote.”
“Ballots accepted anytime between 6 and 7 pm on 8/7. No restrictions on residency or proximity. If we get triple digit attendance, we win (per elected officials). Show up, vote and leave.”
“We’ve been told, by the decision maker, triple digit attendance, in opposition, would be enough opposition to stop this application.”
These posts have been rampant on social media.  The truth is that on August 7th the Desert View Village Planning Committee met for an informational meeting.  As you are aware, no “vote” was taken, or is ever taken, at the first Village hearing on a PUD.  Certainly, no vote can ever be taken that prohibits an application from moving through the process.  The Councilman has never suggested that “triple digit attendance” will “stop the application.” This is simply a gross distortion of the process, intended to manipulate the outcome, and is just not accurate.

Myth #2:  The applicant is proposing a 65-foot-tall cell tower.
A 65-foot-tall cell tower is permitted by right today on the site.  It is also permitted on the CVS and Primrose sites.  I am not proposing, nor have I ever proposed a cell tower; it is simply permitted as part of the underlying C-1 zoning.  However, I have agreed to specifically preclude it as a permitted use in response to neighborhood input on the issue, as discussed at the Village Hearing.  If the PUD is approved, no cell tower.  If it is not, then a cell tower can be developed.  It is that simple.
Myth #3:   The storage facility will be 44 feet tall and tower over Primrose and CVS.
The building will have a maximum height of 28 feet as measured by the City of Phoenix.  In the City of Phoenix, height is measured from the finished grade level or natural grade, whichever is higher, to the highest level of a flat roof and does not include parapet walls.  Here the finished grade level is higher than the natural grade.  If you include the parapet wall, the maximum height to the tallest point is 32 feet.  Under all circumstances, this is lower than the top of the parapet wall on the nearby CVS, due to the sloping terrain.
By comparison, pursuant to the existing zoning today, a commercial building could have a maximum height of 30 feet from finished grade level to the roof deck, and 37 feet to the top of the parapet wall, taller than CVS.  A multi-family development can be even taller!  Again, if the PUD is approved, it will be lower than the tallest point of CVS.  If it is not, a building taller than CVS could be built.

Myth #4:  “The PUD would allow a much bigger, busier business and building than current zoning allows.”
Total nonsense.  The following uses are permitted in C-1: 2 to 3-story apartments, a sober living home, a gas station, Dollar General, etc. A retail store such as Dollar General can have a loading dock facing the residents, set back 50 feet from the southern property line, as opposed to the 90 feet currently being proposed.  And again, Goodwill has made an offer to buy this property. 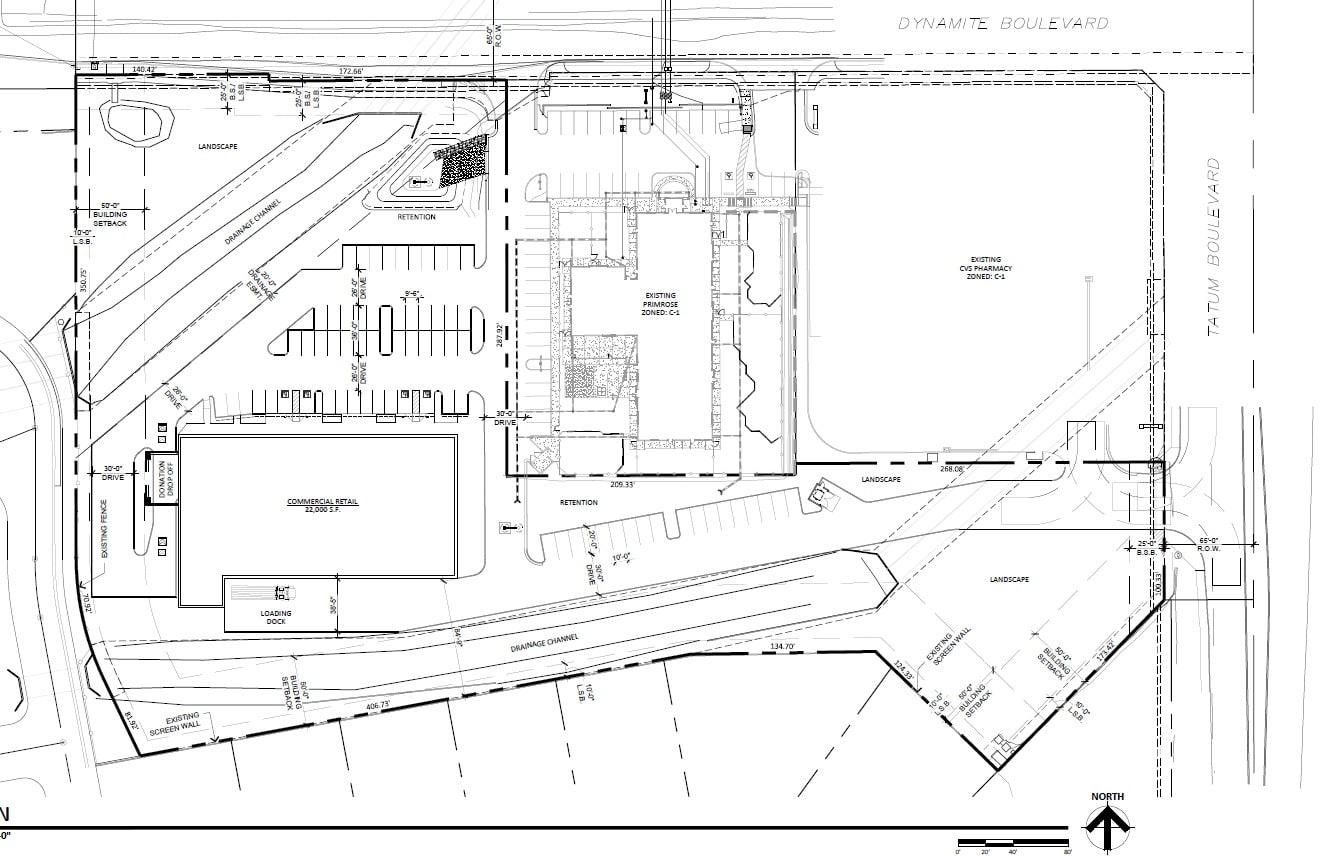 Or here is a version with apartments: 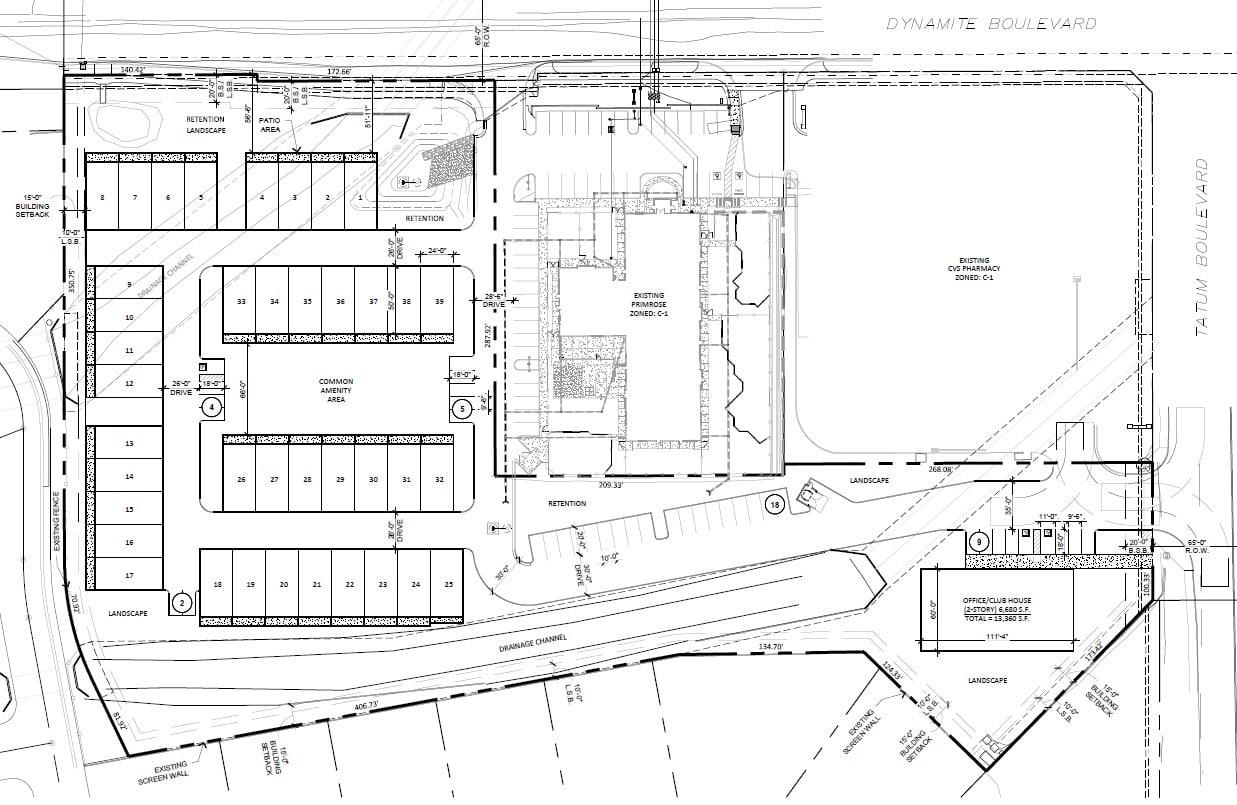 These apartments can have balconies facing the neighborhood, and roof top decks.  The proposed site plan is a clear and significant improvement over these uses. 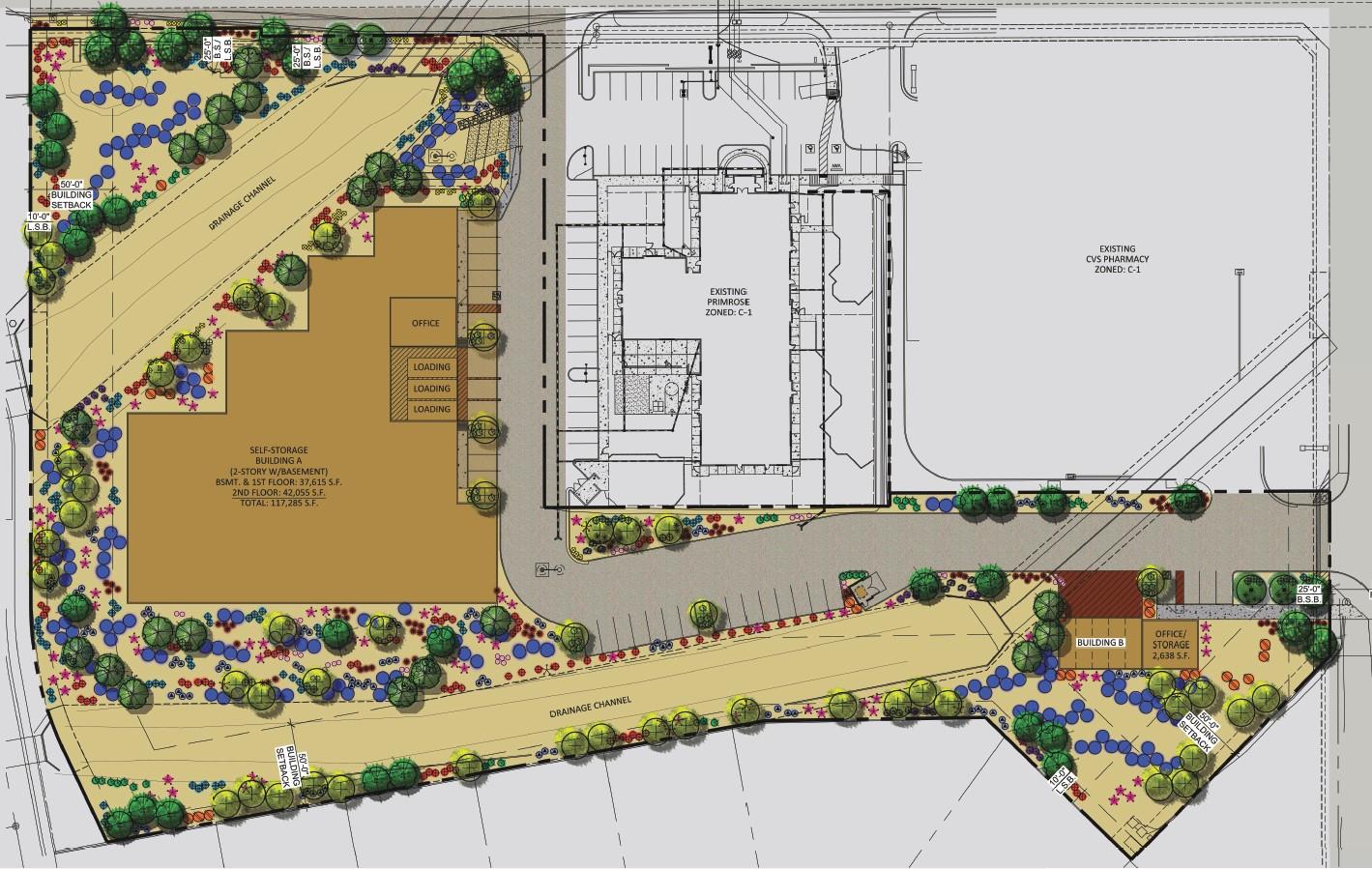 Myth #5: There will be too much traffic if this is approved.
There is virtually no C-1 use that has less traffic than a storage facility.

Myth #6:  There will more crime if this is approved.
This high-end facility will be monitored by 24-hour security and will only be accessed by a key code. Our three other storage facility properties in Arizona have had collectively only one police report in the past six months and that was for disturbing the peace! By comparison, an apartment complex or the back of a typical C-1 shopping center, with dumpsters, truck bays, or areas for employees to smoke is certain to induce more crime.
Myth #7: I will lose my mountain view if this is approved.
This proposal is not only a reduction in height, it is setback 90 feet from the southern property line (where only 50 feet is required by the existing zoning for a commercial building and 15 feet for a multi-family residential development!).
Here is a photo simulation showing the south side of the building:

Myth #8:  This is another project by an out-of-state developer who does not care about our community.
I am a third generation Phoenician, who wants to see this site develop in a way that benefits this community.  In fact, I am willing to donate units to local sports leagues for storage of their equipment to help show my commitment to this community.  We are researching now the best organizations to approach for the donations.
Myth #9:  My property values will go down if this approved (my realtor told me so….).
Would a 2 to 3-story apartment building or a Goodwill be better for property values? No. Your Next Closet will be the nicest such facility in the Valley, rivaling if not exceeding the one near the Estancia Country Club and Pinnacle Peak in far north Scottsdale, where the state’s top homebuilders are constructing dozens of high six-figure homes.
Myth #10:  My property will flood if this gets approved.
The chance of flooding is not increased if this is approved, and in fact, is likely decreased.  We are putting in greater retention than required by this development, thereby decreasing the amount of runoff through the site.
Changes and Improvements!
As I mentioned at the outset of this letter I have some very positive news to share about changes we are making to the project.  Community input has made a difference and we would like to continue to seek input on some of the changes below.
*Discounts for rental units will be provided for a certain radius of neighbors for an extended period of time;
*We are exploring incorporating art with notable murals or other artistic elements by an accomplished local artist;
*Space will be donated to local charities or youth sports organizations to aid their operations.  We welcome your suggestions for such beneficiaries and are currently researching some of the area’s best; and
*Finally, we are evaluating our proposed heights as we speak and are cautiously optimistic we may have some additional good news in the future for you on this front.
Thank you for reading and helping us create the best possible project! Please let us know your thoughts by emailing us at YourNextCloset@gmail.com.
Sincerely,