By Scottsdale Pinetop
A war-hero patriot, an Arizona Senator and a presidential candidate. The legacy and political career of Senator John McCain has become a staple of Arizona’s pioneering identity. And now as he continues his fight with brain cancer and President Trump’s tweets, local Arizona residents are attempting to honor Sen. McCain’s legacy and Arizona’s history. 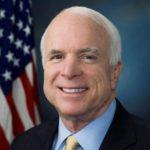 An architect, a developer and a local artists have teamed up to start a campaign to create the ‘Maverick Mural’ in the heart of Old Town Scottsdale, as a tribute to Sen. McCain. The mural is expected to sit on 4235 N. Marshall Way and be 30 feet tall and 120 feet wide.
From a distance, all one sees is the image of McCain in front of the Arizona state flag. But take a closer look and it becomes a collection of smaller images representing Arizona’s five C’s.

What are Arizona’s five C’s? Well in case you forgot from your middle school civics class, they represent copper, cattle, cotton, citrus and climate. Though somewhat irrelevant to today’s economy, these five C’s served an important role as the state’s early economic engines.
But bold murals are not a new concept for the Scottsdale scene. Earlier this year, Experience Scottsdale authorized Phoenix artist Lauren Lee to design murals around Scottsdale. Hoping to attract younger people into the neighborhood, these bright and colorful murals create the perfect backdrop for social media posts. The Maverick Mural seeks to have the same impact.
Sitting as Arizona’s second longest-serving senator, McCain has become somewhat of a grandfather figure to Arizonans. Regardless of opinion, McCain remains one of Arizona’s most powerful political figures. The Maverick Mural captures this. The mural highlights Arizona’s independent spirit, unique history and ongoing public service. As Mayor Lane would say, it represents Arizona ‘At It’s Best.’ This mural will be a great addition to the ongoing development of Scottsdale’s art district and we look forward to welcoming it to one of Scottsdale’s finest neighborhoods.