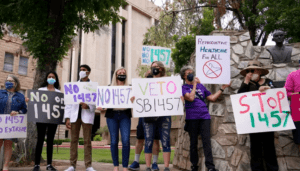 Nearly every Arizonan who is somewhat engaged to the news cycle and politics has likely heard the recent bombshell news: that a territorial-era 100% complete abortion law is now the law of the land in Arizona. No exceptions for rape, incest, the life of the mother…a law that seems nearly as backward as the myriad racist laws prevalent at that same time.

The Pima County judge who made this ruling, Kellie Johnson, was a Ducey appointee, which makes his recent statement from his spokesman quite strange. Ducey’s camp is disagreeing with this conclusion and is stating that the post-15 week abortion ban passed this year is instead the law of the land. Rather curious that he would directly contradict his own appointee.

Ducey is many things, but he is certainly not a political fool. He understands that while nearly no one will admit it, this ruling is a gift to Arizona Democrats. Not the individual voters, many of whom would be very negatively impacted by this onerous ruling, but the party and the politicians therein. They now have a clarion call, a siren with which to motivate the electorate to rally, and an event to mobilize under. That’s why even AG Brnovich is joining Ducey in a call for a special session to clarify and codify the 15 week rule.

And leaving aside the potential nightmare impacts of such an antiquated law, it couldn’t have come at a better time for Dems. It looks like Biden’s recent ratings bump seems to have leveled off, a recent negative GDP print means we are technically in recession (and “technically” likely undersells it) and gas prices appear to be reversing their precipitous drop towards a sane price level. There are no positive catalysts for the national Democratic party, and it’s tough to point to any local ones either. A complete abortion ban gives them their best chance to stop a red wave in Arizona.

And while we loath to talk about such an unfortunate and delicate circumstance in such cold, uncaring language, this is politics. Objective analysis is important. And objectively, the Democrats need this. So the real story is, will a special session be called? Who will support it and who will object to it? Because the insider perspective would likely show some interesting bedfellows.

When a devout Catholic such as Ducey recognizes the vital need to reverse this, that should tell you something. And while some Republicans will almost certainly favor the draconian law, I will venture a guess that most of them will fall in line. But will all Democrats, or will they look for reasons to sink it in order to preserve their talking points for November?

I truly do hope that they do revert back to the 15 week rule. But I would also not be the least bit surprised if some on both sides of the aisle attempt to use this as a chess piece instead of doing the right thing for Arizonans. Cynical? Absolutely, but observing politics for a long time will do that to you.