As you know, Gov. Scott Walker of Wisconsin has established a reputation as a committed reformer and one of America’s most innovative governors.
And today I’m proud to announce that he has endorsed my candidacy for governor of Arizona, as reported in an article by The Washington Post, linked here. 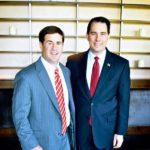 Governor Walker’s fights to revive Wisconsin’s economy became a national story in 2012, when special interests attempted to recall him. As a result of his successful fight, Gov. Walker has developed a national grassroots following and is a hero to conservatives all across the country.
Here’s his statement:
“Doug Ducey demonstrates the kind of conservative, common-sense leadership that our party needs in Arizona. He’s not afraid of taking on tough challenges, and that’s why I know he’d be a great Governor.”
I’m grateful for his support and am honored that he decided to endorse my candidacy. It’s another sign of the momentum we’re building, and I’m confident we’re entering the summer months in strong shape to win the primary in August!
Thank you,
Doug
Paid for by Ducey 2014