What about them, they ask?
What about Bob Kalsu? Until Tillman died in Afghanistan 10 years ago today, Kalsu, a rising star lineman for the Buffalo Bills, had been the last NFL player to die in service to his country. Kalsu was killed in South Vietnam in 1970.
In all, 26 young men who played in the NFL died in war, the majority during World War II.
For that matter, what of Rocky Bleier, the remarkable Pittsburgh Steelers running back wounded in both legs in South Vietnam in 1969?
Told he would never play football again, Bleier returned from war to team up with Franco Harris and Terry Bradshaw on some of the greatest NFL teams of all time. He’s not enshrined in Canton, Ohio. Yet, the Bleier story is among the most incredible in sports. 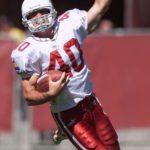 There is no great football argument for Tillman, as opposed to others who served.
But there is this: Finding a spot for a Tillman bust in Canton is an argument on behalf of all NFL players who sacrificed their lives in service to their country.
The very concept of the modern era’s super-stallion players giving up their riches to serve in the U.S. military is becoming almost inconceivable. Enshrining real heroes such as Tillman, Kalsu, Bleier and others would remind NFL fans that the stars of their cherished sport are citizens as well as football players. The word “sacrifice” can have a deeper meaning than merely training really hard as an athlete.
Vast amounts of media and money effectively seal off NFL stars from the world in which they live. An acknowledgement of those who committed to their country, as well as to a sports league, might help burst that hermetic seal.
The Tillman legacy stands out as the epitome of that brand of sacrifice. Tillman turned away from a $3.6 million contract with the Arizona Cardinals in 2002 to join the U.S. Army as a Ranger. There was no military draft, and no social pressure to serve beyond his own sense of duty.
In death, Pat Tillman remains nearly as much a force of nature as he was in life — due, in large part, to the continuing efforts of his widow, Marie Tillman, to make the Pat Tillman Foundation a vital institution for helping veterans transition back to civilian life. The foundation has provided $4.6 million toward helping 290 men and women attend 85 colleges and universities around the country.
Why should the NFL enshrine Pat Tillman? No one makes the case better than Tim Hsia, an Iraq war veteran who is about to graduate from Stanford with a law degree and an MBA, which he earned with the help of the Tillman Foundation:
“He already is a legend,” Hsia told the San Jose Mercury News. “But his lasting impact might not be felt for 20 or 30 years. That’s when we can take measure of all the amazing things done by this group who all are linked to one person.”